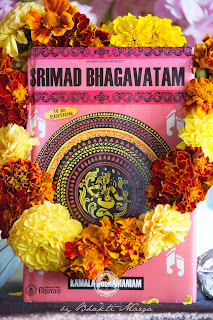 The second day of the Shreemad Bhagavatam course with Sri Swami Vishwananda was filled with stories of Avatars and bhaktas - incarnations of the Lord, and the devotees who focused their minds and hearts on Them.


At this point in the holy book, we're led to learn about the destruction of the clan of Krishna and the Pandavas, the onset of Kali Yuga, and the appearance of Varaha, the boar incarnation of Mahavishnu. In each story, we're getting to see glimpses in to the gem of Bhakti through Swamiji's explanations - how each dilemma points the way for people to surrender to the Lord. No matter how terrible each of these situations may seem, we see in each one that it is God who has in fact planned each and every detail for the uplifting of every soul. 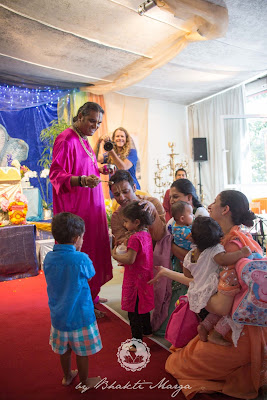 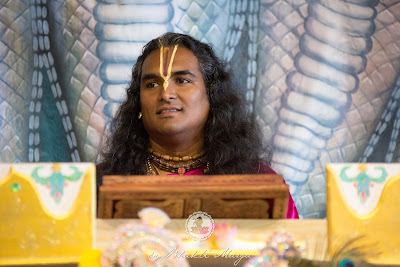 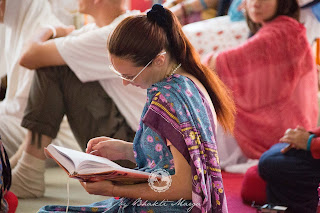 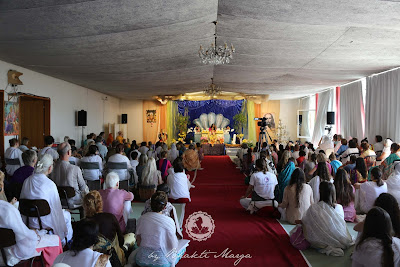 The Death of Bhisma

The great steward of the Kaurava-Pandava kingdom, Bhisma, was actually a son of the holy river Ganga and King Shantanu. His life story is a wonderful one: he was an extremely gifted warrior from an early age, took a vow of brahmacharya to help his father, and learned the art of warfare from Parasurama, the axe-wielding sixth incarnation of Lord Vishnu - which he even defeated in a 23-day-long duel. He survived his two step-brothers, and cared for the kingdom with wisdom and righteousness while the grandsons of his step-brothers, the Pandavas and the Kauravas, grew into maturity.

As a divinely-born soul, he had the gift of dying at the moment of his choosing. This blessing, combined with his great abilities as a warrior, made him an extremely intimidating figure on the battlefield. However, despite Bhisma's great wisdom and righteousness as a person, he was bound by an oath to serve whoever was the ruler of the kingdom. At the time of the Kurukshetra war, this was the blind king Dhrtarastra: the father of the Kauravas, the enemies of the Pandavas.

Because of his oath, Bhisma was bound to fight against the Pandavas, even though he sympathised with them. He made a vow to not kill any of the Pandavas, which he kept to the dismay of the eldest Kaurava, Duryodhan. Duryodhan challenged Bhisma many times, saying that his affection for the Pandavas made him ineffective as the general of the Kaurava army. However, Bhisma was the greatest support the Kauravas' had: while Bhisma was active in the battle, all 100 Kaurava brothers remained unharmed in the fight.

The fallen elder was not even touching the ground because of the many arrows Arjuna had shot into him. Despite this, he was still not dead - he had the boon to die at the moment of his choice. The armies of both sides came to mourn the fallen elder. Arjuna arranged arrows underneath Bhisma's head as a pillow, and then shot an arrow into the earth with so much force that a spring of water shot up in a way that Bhisma would not go thirsty under the hot sun. 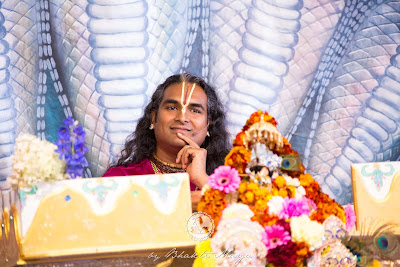 During the Shreemad Bhagavatam course, Sri Swami Vishwananda spoke about the greatness of Bhisma's devotion to Krishna:

Bhishma said, “At the moment of dying my concentration is on Him [Krishna]. I can see Him only. I'm attracted to Him. Like a magnet He is pulling me towards Him. I concentrate my mind upon the chariot driven by Arjun who stood with a whip in His right hand, a bridle rope in His left, who was very careful to give protection to Arjuna's chariot by all means. Those who saw Him on the Battlefield of Kurukṣetra attained their original forms after death.”

So, he is saying, Bhishma is saying that those who saw Krishna while dying on the battlefield they all attained their true form. They were not just mere people. They were devas which have all come to be able to have a glimpse of the Leela of the Lord, you know, to be able to participate with Him. Even being a soldier, out of these 4 million, people, just to have a glimpse of Him is enough. That glimpse itself liberated them, freed them. 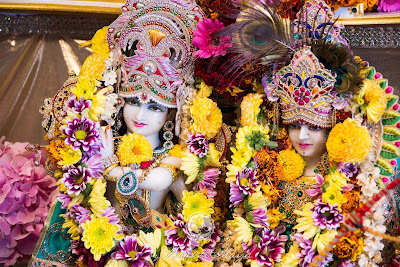 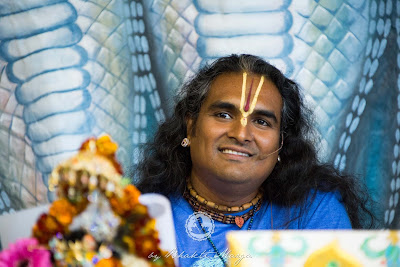 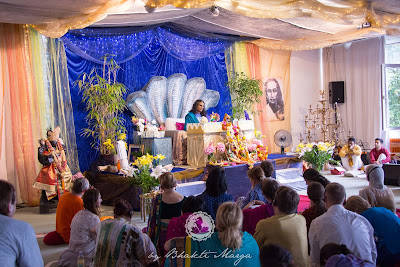 But when he was on the battlefield his eyes were always on Krishna, not even on Arjun. His mind was focused on Krishna only. So, what greatness it is, you know. How he explained, how he is saying that in his right hand He is holding the whip, in His left hand He is holding the rope, you know, and how careful He is to protect Arjun. How He is seated inside of the heart of each one! He is there. The charioteer is guiding the chariot.

So, Here Bhishma said, “Those who have seen Him in His physical aspect, those who came face to face with Him after they die they attain back their original aspect.” Even Duryodhan, it was just His game. All the Kauravas was only His play. Because He is God. If God was limited by something then He can't be God, no? Bhishma is saying, “Realise that, so that while dying you may have the vision of Him. If you die having a vision of Him you are free fully, unless He wills it differently. [The audience laughs]. 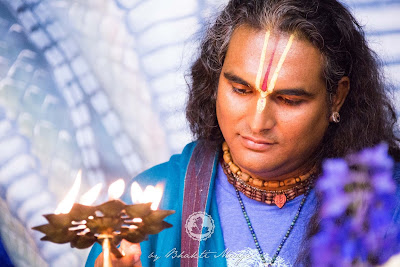