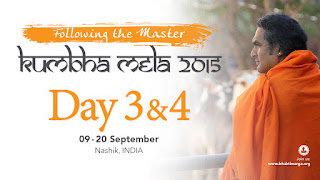 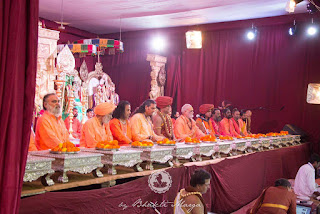 "If you take any deity – take Rama, take Krishna – they all have a Guru. They all have a teacher to guide them. They are the embodiment of the Divine fully, but yet, they show that in life one needs the blessing of a Guru and the way to receive it is through Satsang, through gathering." - Sri Swami Vishwananda

After spending two beautiful days at Shirdi, the group arrived in Nashik, India, which is the central destination for everyone attending Kumbh Mela 2015. 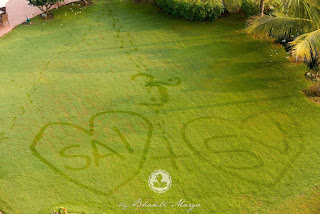 The camp site near the Godavari river, where the main bathing dips will take place, has been set up for the 150 + devotees traveling with Sri Swami Vishwananda on this special trip. Days Three and Four were mostly spent getting situated and meeting spiritual teachers to share in Satsang.

Being the rainy season in India right now, car travel can be a real challenge due to the torrential downpours that quickly turn roads into rivers. 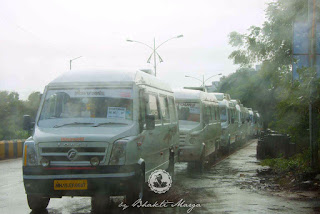 Nevertheless, the group manged to visit the camp sites of several spiritual teachers. 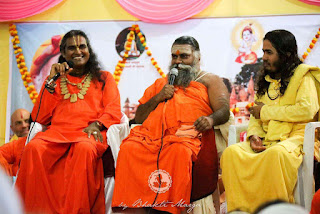 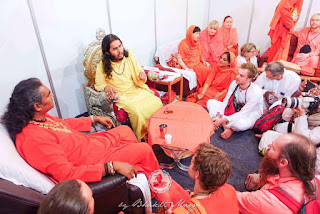 One of the main highlights of the past two days was the meeting between Sri Swami Vishwananda and Paramahamsa Nithyananda. 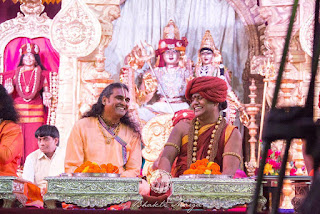 Here's a brief report from one in the group about the meeting between the two spiritual Masters:

"Today we left the campus where we are staying at 5:45 am to visit the camp of Paramahamsa Nithyananda which is in Triambhakeshwari, around 30 km away." 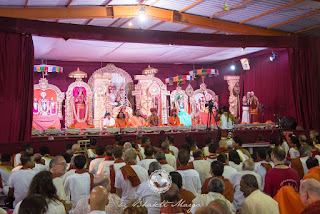 "When we arrived, Swami Nithyananda greeted Guruji wonderfully and seated him on stage right next to him. Many other guests were also present, including dignitaries from the Ananda Akhada and other saints from all over India. After many speeches, Swami Nithyananda's young devotees demonstrated the abilities of their third eye opening, as taught to them by Swami Nithyananda. A young girl read several random texts while blindfolded, truly amazing all present." 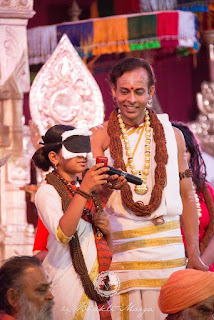 "After all demonstrations had ended, Guruji addressed the audience with a short speech. In it he praised the Guru as Bhagavan Himself and stated that only through His Grace can salvation be attained and all sadhana is fruitless without the Guru's blessings. He urged all the devotees of Paramahamsa Nithyananda to shower all their love on their Guru and surrender their minds at His Feet. He went on to say that Paramahamsa Nithyananda is the embodiment of Lord Shankara Himself on Earth and His devotees should count themselves lucky to have such a special Guru." 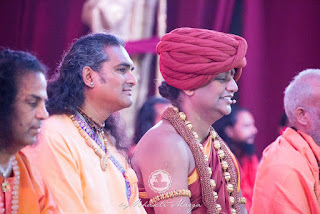 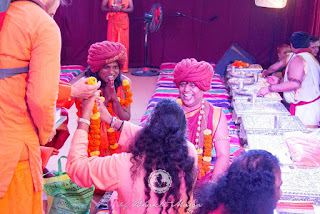 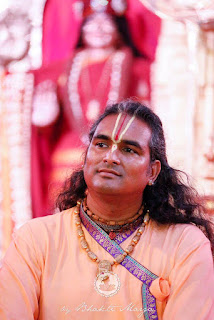 The next few days should be quite exciting as millions gather for this event and the Kumbh Mela activities officially begin. Stay tuned!