In many of the stories of the Shreemad Bhagavatam, Devarishi Narada teaches that if one wants to be free, the easiest way is to listen to stories of the Lord's Glory. These tales awaken bhakti through Grace, and help calm our minds. Swamiji pointed out that these stories show that the misery we find is due to the expectations that we make.

Hearing the stories of the Lord's Glory works on us in two ways: we get the chance to fill our mind with ideas about what is good and what is not, which helps us to act in ways that awaken positive qualities within us. But more importantly, when we find a spiritual master to hear the Glories of the Lord from, we practice humility.

God Himself is very humble, as He demonstrates frequently in each of His incarnations. One becomes humble by going to His bhaktas (namely, saints who are completely surrendered to the Divine) in order to learn. Uddhava was a dear devotee of Krishna, and his first meeting with the gopis in Vrindavan describes his transformation to humility.

The story begins as Krishna tells Uddhava, "I am Love but I can't give it to you. Go to my bhaktas." Now, Uddhava was a very learned man, so on his way to Vrindavan, he planned to teach the gopis how to focus on the formless God, based on the scriptures that he had been trained in. However, once he arrived, the gopis told him they didn't feel anything from hearing his philosophy, but they knew Krishna in every moment of their lives. They experienced Him continuously. By Uddhava being with the gopis, he was able to experience Love directly - which was not what he'd only understood theoretically before. Uddhava had not felt that Love before, but by being in the presence of gopis, he felt Krishna's Love through them. 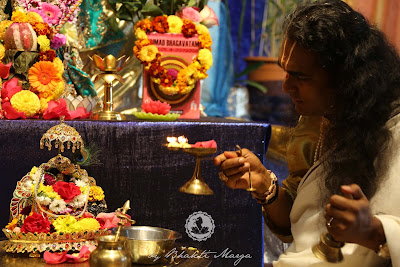 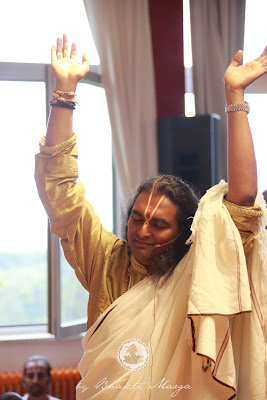 Yet, after all these amazing stories and spiritual messages, the true focus of the Shreemad Bhagavatam was...

The Life of Sri Krishna 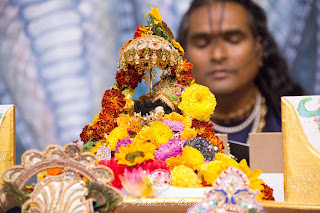 The Shreemad Bhagavatam's main focus is the life of Sri Krishna - the eighth avatar of Narayana. We learned details and hidden meanings in each stage of His life:
With all the adventuring that took place in Krishna's life, however, the repeated core theme of the life of Krishna in this course with Swamiji was the devotion of the gopis. Towards the end of Krishna's stay in Vrindavan, the Rasa Leela took place - the mystical midnight dance of Krishna and the gopis. At the beginning of telling this story, Swamiji said that this was the heart of the Shreemad Bhagavatam itself.

The Rasa Leela started one autumn evening, when Krishna went out into the forest. He started playing His flute, which was heard from all over Vrindavan by the gopis - wherever they were, they immediately knew that Krishna was calling for them.

To go immediately to see Krishna, they left whatever they were doing - their families, their chores, everything - and went in search of Him.

As the gopis approached the place where they thought Krishna would be, He made Himself disappear. When the gopis were unable to find Him, they searched everywhere frantically.

Seeing their search, Krishna appeared among them majestically in the form of Mahavishnu - the Lord of the Universe Himself - and asked, "Who are you looking for?"

The gopis bowed to Him out of respect, and asked Him only, "Have you seen our Krishna?"

The gopis started to sing what is now known as the Gopi Gita. Swamiji gave commentary on each of the verses - each word dripping with the amazing Love that the gopis had for Krishna:

The Gopi Gita is the heart of the The Bhagavatam. There is no Bhagavatam than the Gopi Gita, the song of the gopis, the longing for their Beloved. So, the gopis were so much filled with love, but at the same time their heart was paining, they could not see Krishna. They were crying, wailing, “Where are you my Lord?” 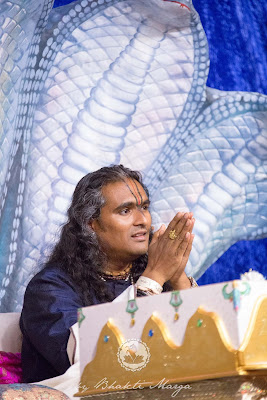 Dayita dṛśyatāṁ, which means that due to that strong longing they were humble and surrendered. So this deep longing, when they were humbling themselves, the feeling awakened and the Grace of God awakened itself. “O Krishna...”, then the gopis prayed, “Do not look on our mistakes, on our faults. However we are, we are Yours. Please, give us a sign that You are here. You are our heart. You fill our hearts with happiness.”

So the gopis were very well aware of their pride and they knew why Krishna was not showing Himself to them. So they started crying, their eyes were with tears and they were humble. They could not speak properly. Tears were rolling down from their eyes. They were thirsty only for one thing: to have the Darshan of Krishna. Because that's the only thing that would fulfill them. Krishna looking and smiling. So Bhagavan is saying, “I'm residing in everybody’s heart. I am having this conversation with you so that you do not worry about Me appearing.” 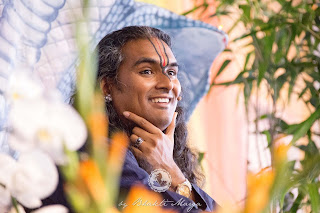 So, you see, the gopis, when they offered their prayers to the Lord, longing for Him, calling for Him, the same way that they heard the music, the call of the flute inside of their hearts, they could hear the inner voice of Krishna. They could hear Krishna talking to them inside of their hearts. This conversation they had with Krishna, you know, it was not outside, it was inside of them. So then Krishna said, “You hear my voice, I am the invisible God. So you can hear me. So why do you want to see me? What is your work with this form? Why you want me to appear? You can hear me inside of you, be happy!”

So the gopis replied, “O Beloved, the lovers, the bhaktas, those who are surrendered to God are never satisfied with the love in the heart. They long to be physically present with their Beloved one. We want to drink the nectar of your Swarupa.” So, here the gopis longing. They could hear inside of them, you know, but, “No, we don't want. We want Your form. It is that which we can identify ourselves with. The invisible God we don't want. He is invisible. What would you do with Him? What name do you give to Him? Which form do you give to Him? The mind can't picture Him. I know you are everywhere. You are present in everything. But the sweetness of the form.” We have a form, we have a mind, we have a body. Our mind is always looking for something – no? - to hang on and that's what we can identify ourselves with.

And the gopis said, “You are talking about having to just hear You, enjoy You only inside. It's not enough for us.” So imagine that intensity. You see, people sometimes say, “Okay, I found God inside of me, I am happy.” Here gopis said, “No. We are happy, it's fine, good, we have You inside of our hearts. We are satisfied that we have You inside of our hearts, but we also want You outside. [the audience applauds loudly] So they were in love with Krishna. Their eyes wanted to experience Him. They wanted Him, His reality. So that's why they argued with Him. They said, “Why have you given us eyes then, that we are not able to see you? What is the point of having these eyes?”

Jesus said, no? “Those who have eyes to see, they see.” Here the gopis said three thousand years before, “What's the use of having these eyes if we can't see You? We see the world, we see the happiness and the misery. The same way we see with the physical eyes the happiness and the misery, it would be nice to see the Ultimate bliss with those eyes.” 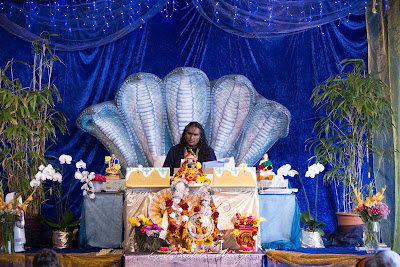 Looking at the Shreemad Bhagavatam course, in short, it was seven days of closeness with God.

The course participants were able to encounter God in His stories, as the holy book is itself a form of Narayana. The course brought us to 'see' and 'feel' each Avatar's leelas within ourselves. The sweetest encounter of the course, by far, however, was that of God as the Guru, spending time with us to share these purifying and uplifting stories, and helping us to rise in Love.

It doesn't matter which form, which Names you take, as long as you have devotion, you have faith, as long as your action is right, your mind is free from pride, you will attain Him. And Bhagavan said, you don't need many lives to attain Him. You need only one life, this life.

Forget about all your lives you have taken, you don't remember. Forget about your future lives that you will take, because you can end it in this life. So, don't create any illusion for the future. Because what stops one is oneself. When we say, “Remember God”, so simple, “Become a bhakta, surrender to Him!” What do you say? “When will I become a bhakta? When will I surrender? It's too difficult. Too far away.” No? 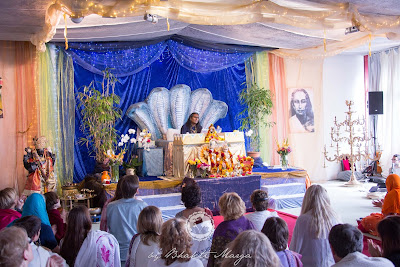 The next day try again. It's not wrong to say that you are nothing. Goswami Tulsidas also said, “I am the greatest sinner of all. I don't know why Ramji has given me this task to write Ramcharitramanas.” He is saying that. You see, when the saints - you have heard, you know, in many lives - say, “I am the greatest sinner”, this is to keep them humble. They don't just say it, they mean it. That's why God comes to them, because they humble themselves. They put themselves down. So if they go down, Bhagavan will come and push them up. But if you are already up, how He will push, how He will raise you? Arrogance will not lead you anywhere, only when you are humble. And it is only when you are humble that He will give Himself to you. 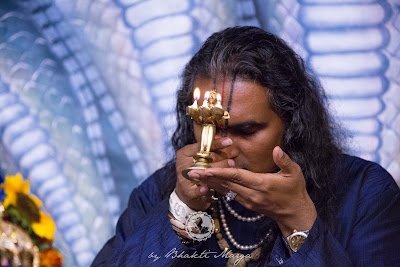 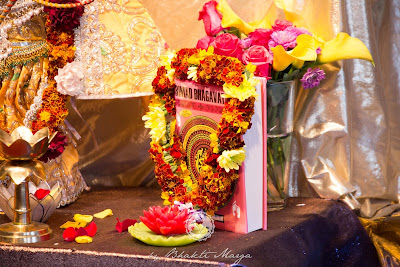 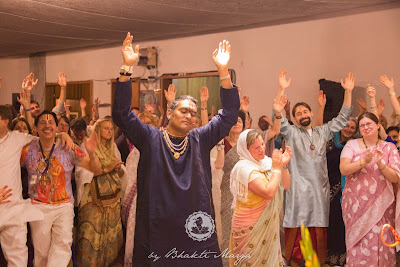