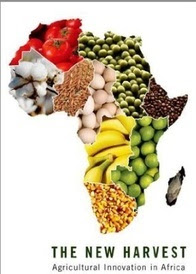 In springtime this year our kitchen crew cooked 10 days very delicious vegetarian food for an international conference of African scientists and leaders of universities from Uganda, Nigeria, Ghana and Kenya.

As one of the main goals is to spread vegetarian, plant protein diet for the poor population of Africa they asked us to cook a balanced vegetarian menu for 10 days. „Support Africa“ is an international foundation who are supported by the European Parlament and already supported several medical clinics and social projects in Africa.

It´s been a very successful meeting as Prof. Pfeiffer mentioned at the end of the conference as they found many native wild plants with high amounts of protein. Finally the scientists set up a 5-years-program starting with collecting and growing best seeds for larger agriculture projects based on natural ecologies only.

Thanks to Swamiji and the kitchen crew to make this happen! 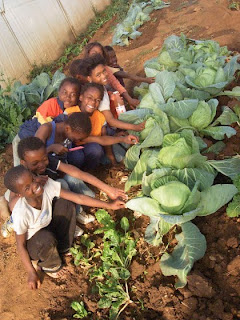 Malnutrition, caused by insufficient protein, is often the source of diseases and poverty in Sub-Saharan Africa. Since further population explosions can be expected, Africans will not have sufficient animal protein in the future. this scenario will become even more severe through climatic changes.

Scientists at African universities undertook independently extensive research on this matter in cooperation with the Research Institute for Sub-Saharan Studies. Now they would like to exchange their findings in a preparatory conference and prepare actions for further research on non-animal proteins.

Known and used vegatable proteins as well as unknown wild plants shall be researched on interdisciplinary and developed further agrnonomical and genetically as well as their cultivation and nutritional use promoted and fostered productions of new non-animal protein products.

Finally, non-animal protein products shall be promoted for home usage and farming. Development-political measures for the introduction and spreading of non-animal poor populations and their production and marketing shall be supported. 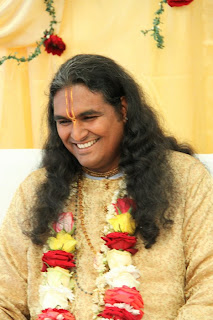 Swami told this story at Gurupurnima (Utpalavati paraphrasing from memory):
There was a boy in Mauritius, actually, who was in despair--over a girl. Of course, I knew about it. I went to his home and asked his mother, "Where is your son?" The mother told me that her son was sleeping in his room. I told her, 'No, he is not sleeping.'
When I went to this boy's room, he had taken lots of pills. The boy became all right. The boy's mother asked me later, "What did you do?" You see, the Divine Mother takes care when you ask her for something if it is beneficial.
Swami told this story very humbly, so that you almost did not notice that he actually was the instrument the Divine Mother used to heal the boy. The story was very heart-touching!
Eingestellt von Unknown um 16:02
Email ThisBlogThis!Share to TwitterShare to FacebookShare to Pinterest
Labels: Recent 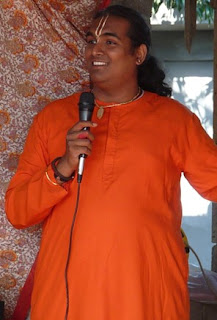 third winner of the rafle 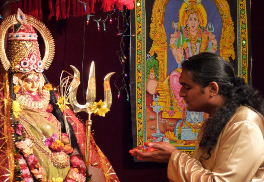 Second winner of the Raffle

First winner of the Raffle

The results of theraffle at Gurupurnima:
1st prize   ticket number 37 goes to Russia  Elvira Sergeeva:
The shoes that Swami Vishwananda was wearing during his travel to the holy places in Israel in 2011. 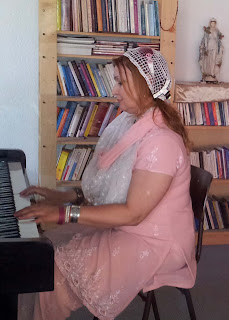 In Shree Peetha Nilaya, the center of Swami Vishwananda, Sulalita from Moskow sang during the darshan amazing bajans. After the Gayatri Yagna she gave a Bhajans' training.
Eingestellt von Vijaya - Vishwananda um 15:46
Email ThisBlogThis!Share to TwitterShare to FacebookShare to Pinterest
Labels: Music

There was also this week nice and lifely lessons, personal and for groups. The basis of the lessons were to be allways conscious that we sing for God. There was naturally also a voice training, breathing exercise, keeping the ego low. Every one was enthousiastic.
Eingestellt von Vijaya - Vishwananda um 14:23
Email ThisBlogThis!Share to TwitterShare to FacebookShare to Pinterest
Labels: Music 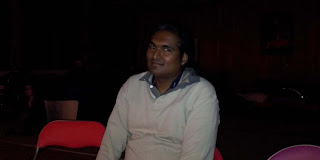 Last evening Some recordings were done and suddenly Swami Vishwananda came into the room to hear the Bajans. We hope that Sulalita will came soon again to continue her teachings.
Eingestellt von Vijaya - Vishwananda um 14:16
Email ThisBlogThis!Share to TwitterShare to FacebookShare to Pinterest
Labels: Music

Swami Vishwananda talked in Russia about: How to experience the Unity with the Divine

God created everything and dwells inside us. Calm your mind so that you can focus on the Divine inside of you. The desire of our soul is to attain God's lotus feet. Love all, love every body then God dwells inside everyone. Remember this every day then you will experience the Unity.
Eingestellt von Vijaya - Vishwananda um 14:26
Email ThisBlogThis!Share to TwitterShare to FacebookShare to Pinterest
Labels: Satsang with Swami Vishwananda

This July, Paartha and Utpalavati (Autor of the book "Unity with the divine"), two disciples of Sri Swami Vishwananda, make a joint tour through Europe.

They stop in different places to conduct pujas, do workshops and satsangs. Both of them are long time disciples of Swami resp. Babaji and help to spread his teachings about the path of Bhakti.

During these events one can also hear news from Shree Peetha Nilaya (Swami’s intl. Center in Springen, Germany). All proceeds from the workshops, pujas and satsangs go directly into the centre and its renovation works.

Here you find an overview over all the places, dates and contact details of the organisers.

We look forward to see you there!

More than 500 devotees came to have the darshan of Swami Vishwananda.
Eingestellt von Vijaya - Vishwananda um 08:38
Email ThisBlogThis!Share to TwitterShare to FacebookShare to Pinterest
Labels: Darshan with Swami Vishwananda

During the white night of St Petersburg, the sky is still clear at midnight. Swami Vishwananda stands before the statue of Peter the Great.
Eingestellt von Vijaya - Vishwananda um 11:07
Email ThisBlogThis!Share to TwitterShare to FacebookShare to Pinterest
Labels: Travelling with Swami Vishwananda

Swami Vishwananda with Russian Devotees on the river Neva which flows through much of the centre of the city. The bridges opens at night to let the big boats go through.
Eingestellt von Vijaya - Vishwananda um 10:56
Email ThisBlogThis!Share to TwitterShare to FacebookShare to Pinterest
Labels: Travelling with Swami Vishwananda