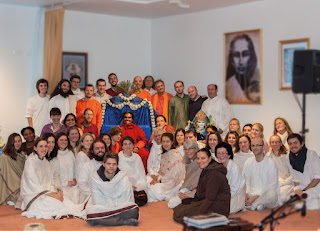 We all wish you a very happy and blissful Christmas! 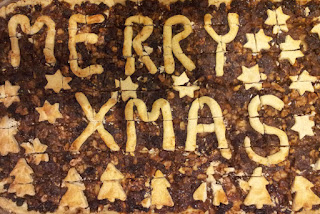 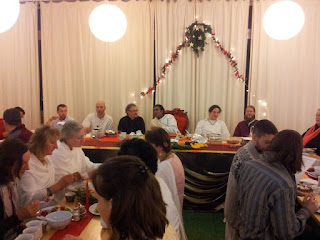 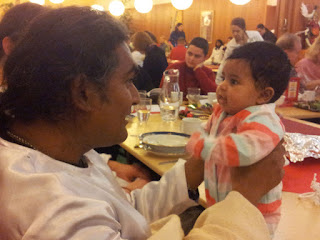 We had a lot of happy Moments with singing, praying, an amazing Christmas dinner together with Swami Vishwananda and several spontaneous Satsangs. 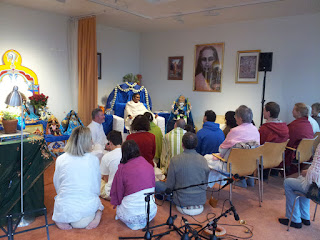 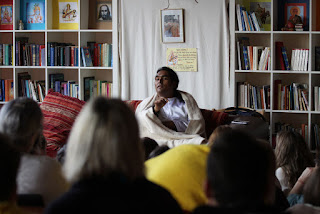 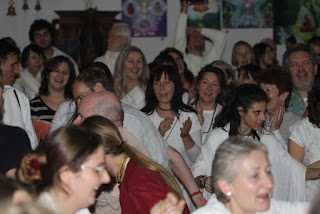 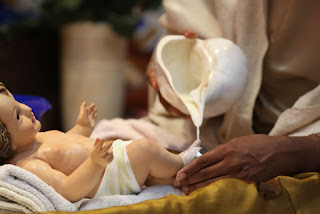 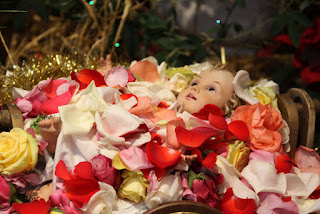 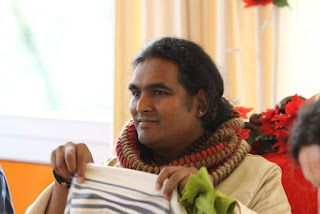 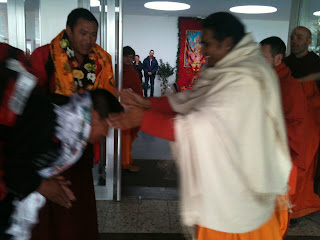 Lama Ngawang from Nepal is a long-time friend of Yamunashree and Elisabeth from Switzerland.  Through them, he was able to meet Swamiji during his last private visit to Nepal two weeks ago. 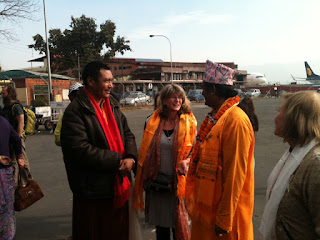 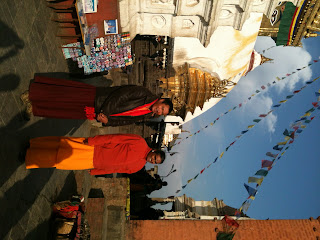 Lama Ngawang founded a school for children almost 13 years ago and he does a lot of great charitable work, aiding children from poor regions of Nepal (Mustang) to obtain a good education and receive the love and care that they would probably not receive otherwise. 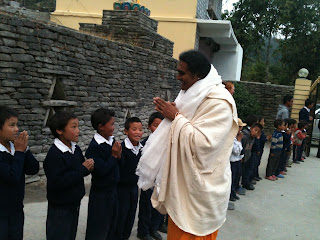 Swamiji and Lama Ngawang became good friends and shared many stories and teachings with each other, which consequently led to Swamiji extending an invitation for Lama to visit us here in Springen, if ever he passes through Germany.
And two weeks later, here he is! 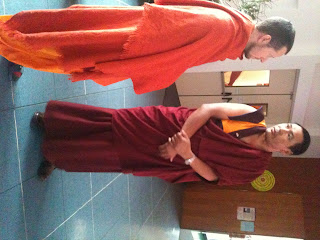 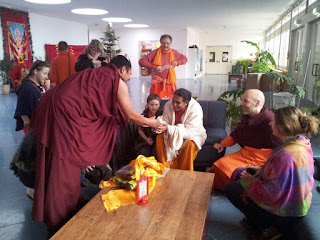 Whilst his visit is a short one, as he has other obligations to attend to in Germany, Lama Ngawang shared with us that Swamiji has invited him to return next year for the official opening of Shree Peetha Nilaya, to spend more quality time with us. 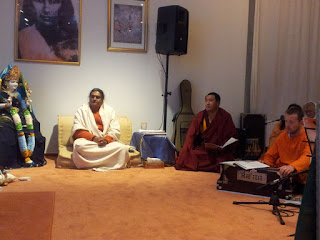 During his next visit he promises to create a Sand-Mandala for us and to speak a little about Buddhism and its culture. 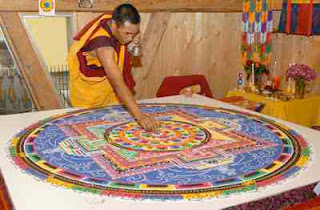 We are all looking forward to it very much!
Eingestellt von Unknown um 10:34
Email ThisBlogThis!Share to TwitterShare to FacebookShare to Pinterest

"So how many people do believe that the world will end in 2012? Eh, nothing will happen. Why do all of you have to concentrate on fear? Eh?  Every time.

You see, you are here, to live freely, to live to attain God, to be free! And then you run after all these predictions. If it is not 2012, it will be 2036, or 2021 or whatever... then you live in fear. Then it will come, okay, 2012, nothing happened, oh good, and great saints have taken upon them, and have saved humans. You know? But it is not like this. Why do you have to live on prediction? Why can’t you just live, freely? Why do you have to live in fear?

Bother about now, be now, you are happy now. Live now, in the moment. Why do you have to worry for the future? Worry that you attain only Him, you know? That you should worry about, that you do everything to attain Him.

"So it is the time where your inside is calling you, you see the world how it is changing. For sure everybody is asking “Why is it happening?” Some people say that in 2012 the world will end, which I always laugh about, but no. Nothing will happen in 2012. What has to happen has to happen here. The change has to happen within you and this depends on the now. If you really want that unconditional Love to awaken, you have to will it also, strongly. And when you do
that, of course, God from inside sends outside help also. He doesn’t leave you alone. He makes it easy for you."
(Excerpt from JUST LOVE 3, Journey to love)

"Some people say that in 2012, on 21st of December everybody will become   enlightened. If it was so easy, I would tell you, “Just sit down,” you know?  “Don’t do anything.” You don’t need to do anything if you will be enlightened, no?
If it was so easy – the saints are meditating, the saints are chanting Divine Names, just to get His grace, and if you just think that on the 21st of December, 2012, God will just say, “Okay, I am merciful today. I give it to everybody,” like that... hey, you will not be able to handle it. You will go crazy! You will find nothing will happen in 2012. And if you really want something to happen, if you really think
that you will get enlightened or whatever, you can attain His Grace on the 21st of December, and if you strongly believe in that... start working from now, on. Strongly. You will, probably, attain His Grace. But then if you feel that in 2012 the world will end - well sadly to say, no, it will not end, but probably. Because if you think so intensely in that, it will be the end for you. Maybe you die. It will be the end of something."
ᴥᴥᴥ

"But one thing has changed: many more people are on the spiritual path. That is good. Many people are searching for something more in life, because, you see, the outside world has its limitation, it gives you limited happiness. If you want that limited happiness, you will be happy only for a short while. If you want real happiness, you have to dedicate yourself. You have to do your sadhana, no?
I said this about the crisis in Serbia. Well there are crises - not only in Serbia, but everywhere. That’s why I said, “Pray for your country.” Not only for oneself, but pray for the country itself. And make people pray for the country, it is important."
(Excerpts from JUST LOVE, Questions and Answers, 2012)

In the Presence of a Teacher - Swami Vishwananda talks about Darshan

Excerpt of a speech from Sri Swami Vishwananda about Darshan: 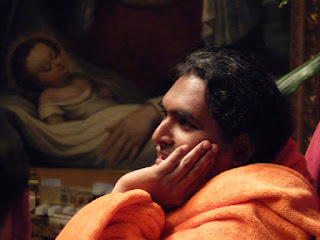 "It’s the same: to be among the Teacher, even if the Teacher doesn’t even look at you or talk to you, you always receive something. You always receive because your soul is immersed with the Love of God.
This Love has everything into it. Always people say to me “Well, I want to talk to you.” You know about it, huh? “I want to have a small minute with you...” And well I say “Later, later.” Sometimes later doesn’t come so quickly!
But you know when you come for darshan what you receive is much more than what your mind understands. What you are given just may seem a touch for you, but is much more than what you can talk about, because the talking is limitation. Even if you are bound by these three things: the mind, the matter and the spirit are like three strands of a rope, you know.
What you receive during darshan is the infusion of the knowledge inside of you, but for that you have to calm your mind. That is why I always say “Calm your mind. Open your heart.”
Until your heart is not yet fully opened, until you have not come to this quiet state of yourself, you are still searching. But search not outside, search inside of you. Try to calm your mind. Try to go inside of you. You will see what you have received." 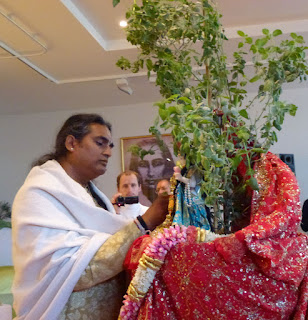 On Sunday last week, Swami Vishwananda celebrated a  special ceremony for  Goddess Tulsi called Tulsi Vivaha, which commemorates the marriage of Tulsi Devi and Vishnu, or in this case Krishna. Tulsi Vivaha is celebrated on the 11th day of the bright half of the lunar month of Kartik.
Eingestellt von Unknown um 15:51
Email ThisBlogThis!Share to TwitterShare to FacebookShare to Pinterest
Newer Posts Older Posts Home
Subscribe to: Posts (Atom)