Paartha writes:
Day 9, Friday, May 30th 2014
On Friday morning we left Naino Devi to continue our pilgrimage towards Mansa Devi Temle and Chandigath. Just as it started getting very hot when the sun came out, the sound of thunder filled the air, and within few minutes rain started pouring down, making the temperature very pleasant. On our way, we stopped in Anandpur Sahib (Holy City of bliss), the “birthplace” of Sikhism as it is known to the world today. 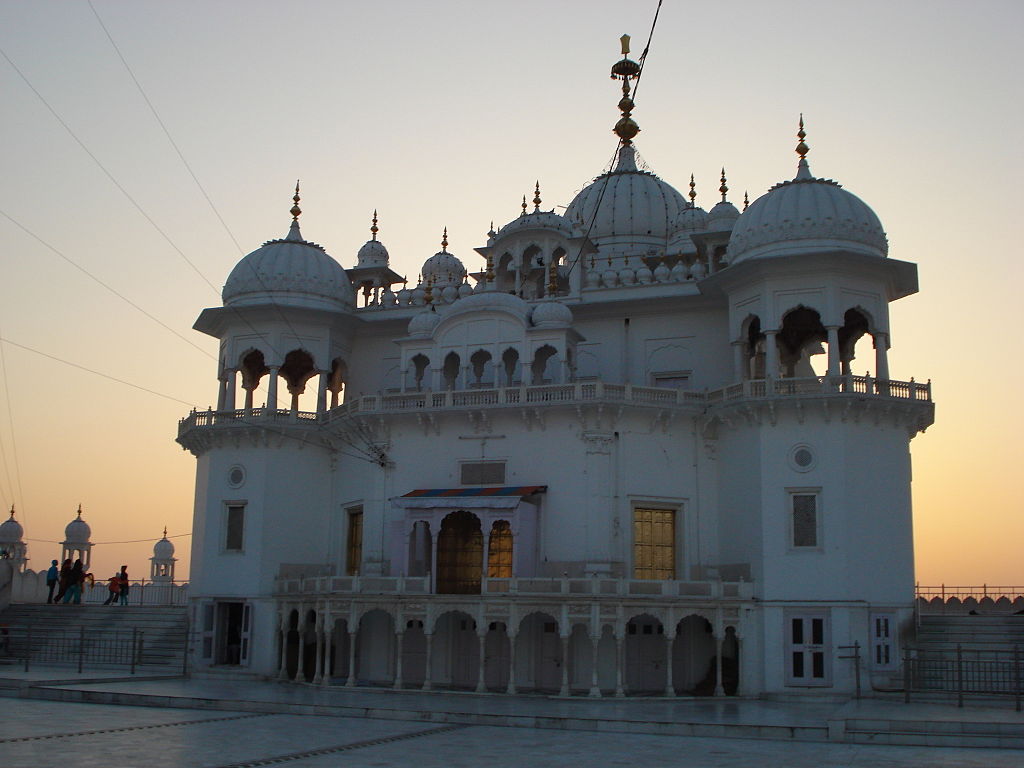 The Guru Dwara (“Door to God/Guru”, a Sikh Temple) looked very impressive and beautiful. At the entrance, those who did not wear a turban (everyone in our group…) had to put on a small scarf to cover their heads. This is the only requirement to enter into a Guru Dwara. 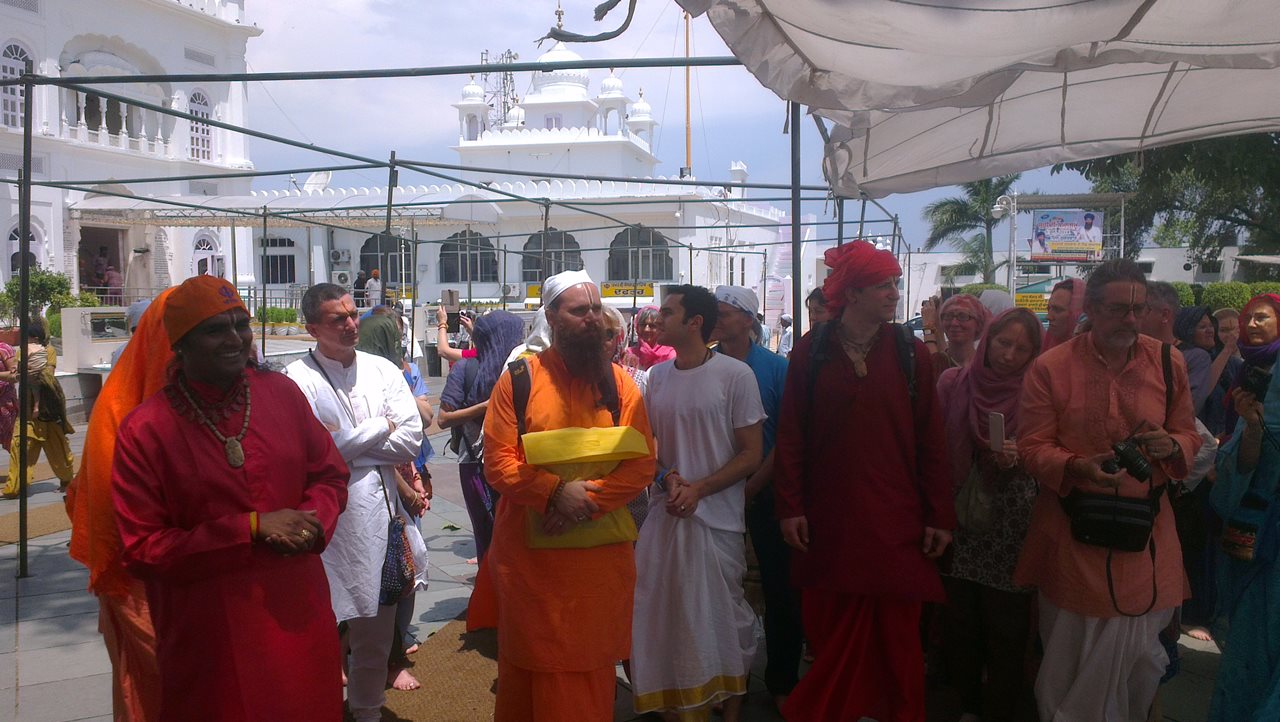 We walked up the steps and finally entered inside and did parikrama (circumbulation) of the Guru Grant Sahib (the holy book of the Sikhs), the holiest spot of the temple. Around the Guru Grant Sahib sat one man who was reading from it, while three other men were singing kirtan. Present inside were also Guru Gobindhs weapons which he used in his fight against the moguls, including the sword which was given to him by Jwala Mata. Then we sat down for about 10 minutes. The atmosphere in there was very peaceful and awe inspiring. Gurpreet then told us more about the history of Sikh religion, and this temple in particular. 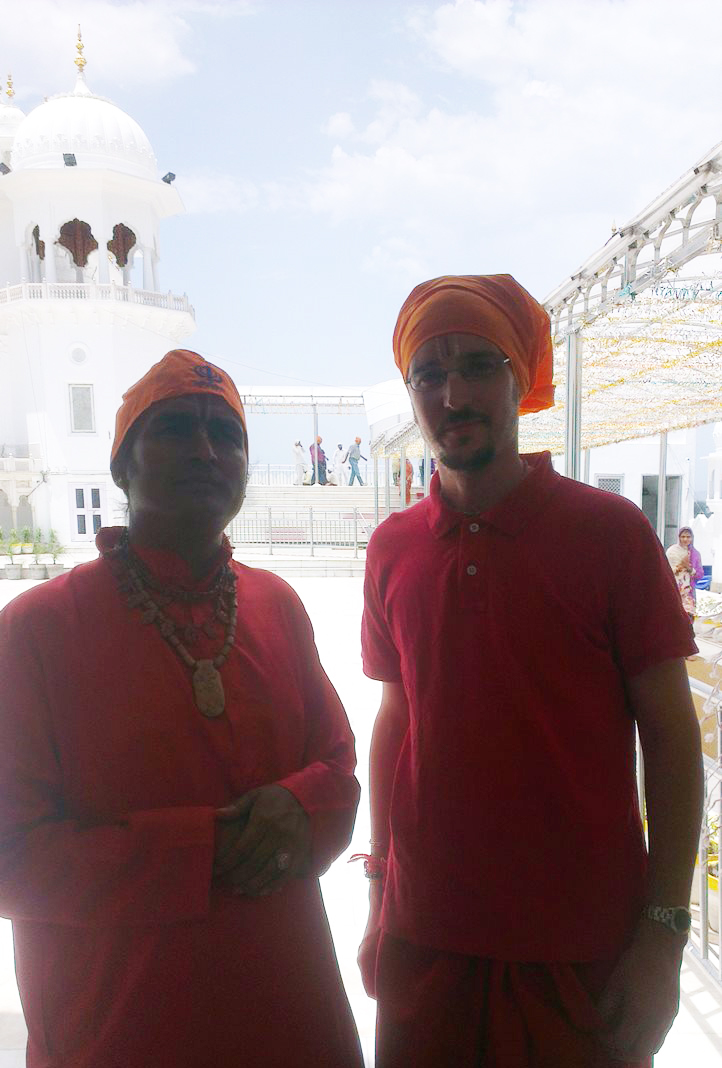 He told us that the founder of Sikhism is Guru Nanak Dev. During the 17th century the moguls began invading India from the north west. Subsequently they also tried to force their religion on the Sikhs. Guru Teg Bahadur and three of his closest devotees resisted conversion and were tortured and killed. 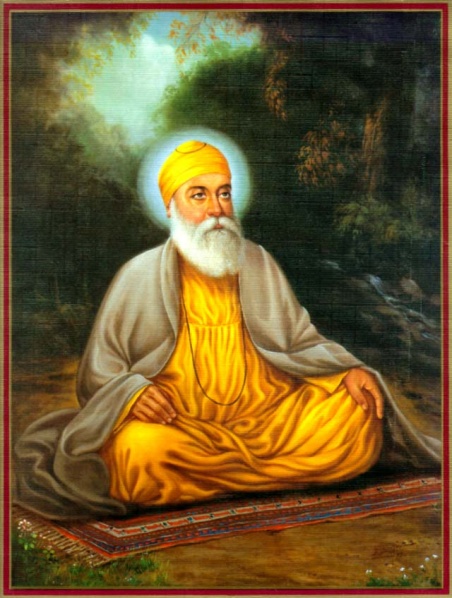 After a lot of suffering of the Sikh people, the next Guru, Guru Gobind Singh, went on a pilgrimage to Jwala Devi (Divine Mother in the form of a flame, see last report). There he received Darshan of Jwala Mata and was instructed by Her that the time had come to take up arms to defend Sanatana Dharma (Hinduism) against the invaders. She handed him a sword and instructed him to found a new warrior class within Sikhism. 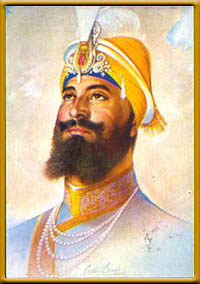 Short after, Guru Gobind Singh’s children were captured. They were summoned in front of the Mogul. Proudly they walked in and said that they were never going to give up their faith. Subsequently they were buried alive. While being buried, they were told, that all they had to do was to accept Islam as the only true religion. But they remained steadfast, including the youngest child, a 4 year old boy, and were killed. 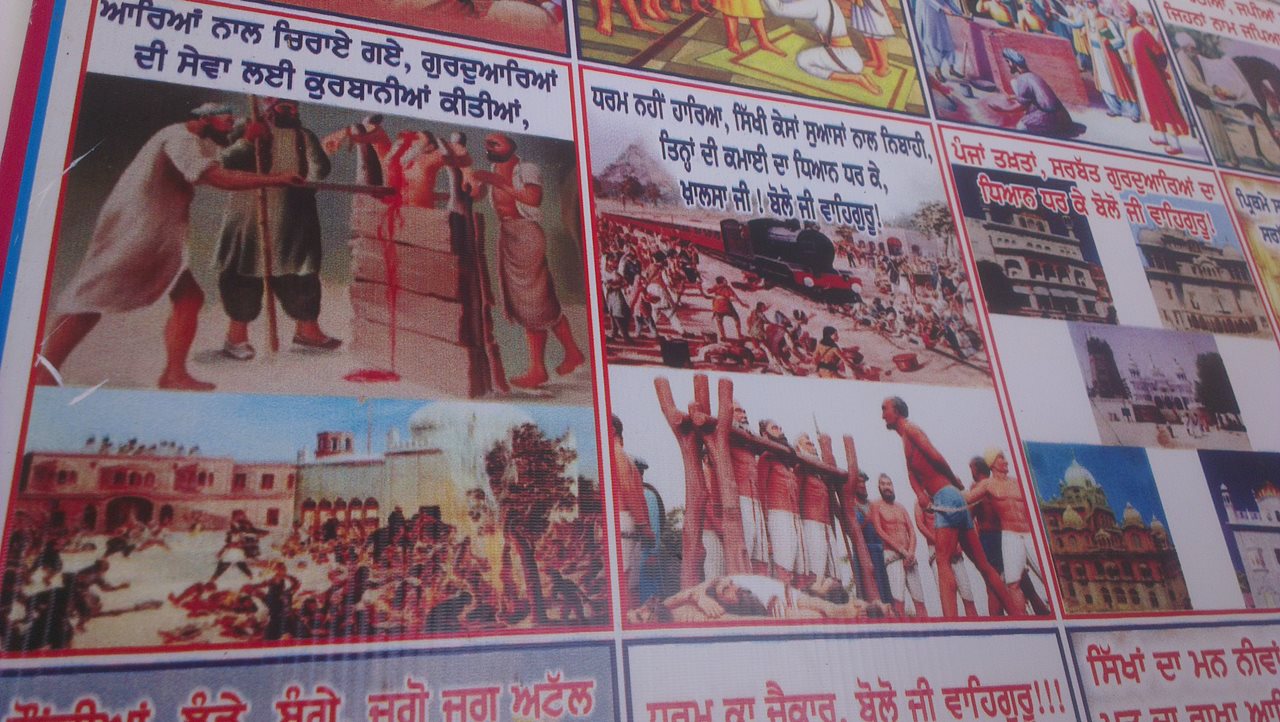 When he came back from Jwala Devi, he assembled all his warriors, and he asked for a volunteer who would give his head for their cause. Eventually one man came forth. He took him in his tent and came back out, holding his head in the hand and showing it to everybody. He announced that he needed another volunteer. Again one man came, and this time he came back out with two chopped heads in his hand. This repeated itself until he had five heads. When he went back into his tent, after a few minutes he came back out, and along with him the five men, their heads back on their necks as if nothing had happened. These five men became the leaders of five groups of warriors. They are  considered “Panj Piaras”, the five beloved disciples of the Guru. Together they managed to stop the conversion of Hinduism to Islam and protect the Hindu and Sikh traditions. 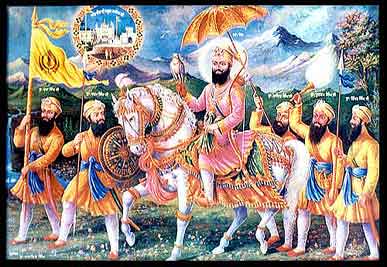 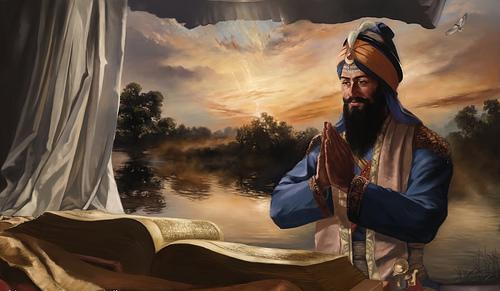 Guruji said, that all the ten Gurus of Sikhism (Guru Gobind Singh was the last) were re-incarnations of the first one, Guru Nanak. Guru Gobind Singh then instructed the Sikhs that the only thing that the Sikhs would worship after him would be the Guru Granth, their holy book. That is why in Sikh temples one doesn’t find any images of deities, not even the picture of the Guru.
Outside the temple is the Akal Takht (a long spear) which is the symbol of the Sikhs.
On our way out, it was interesting to note that there were not only the usual shop stalls with devotional items, but also many stalls with knifes and swords, since it is every Sikhs duty to defend their nation and protect the weak.

We continued our bus journey and finally arrived at Mansa Devi Temple. Mansa Devi is especially known for fulfilling ones wishes (Mansa = wish) and for liberating ones ancestors. The head of Sati has fallen at this spot. 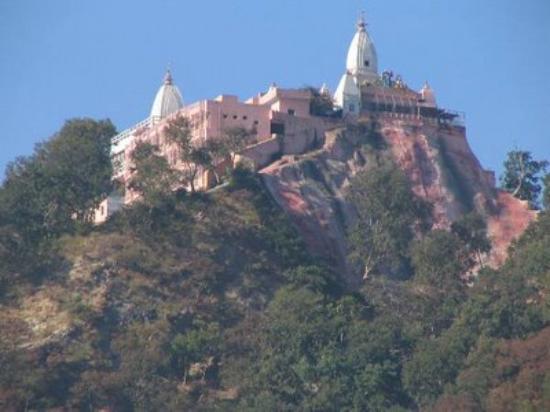 The whole history of the temple and of Mansa Devi is quite long and connected to a saint with name Zart Karu. In those days, Janmejaya was conducting a great snake “Sarpa satra”, a sacrifice that would destroy all living snakes. Janmejay bore a deep grudge against the serpents for having killed his father Parikshit by a snake bite (after the curse of a sage). This led to a dramatic decrease of the snake population in the world and they were threatened to get extinct. On enquiry of the Gods, Brahma spoke to them, saying, that only if a saint with name Zart Karu, who was the only remaining descendant of the snake race, would beget a son, their race would be spared, cause only Zart Karus son would be able to stop the snake sacrifice on earth. The snake king Vasuki promised, that he would give his sister’s hand to Zart Karu so that she could bear a son from him.
Zart Karu at that time was roaming the earth in spiritual pursuits. He did severe tapasya (penance) in order to gain spiritual power and insight. One day he came across a tree on which he saw with his spiritual eye, some ancestors hanging invertedly from the branch of the tree over a ditch, threatening to fall into it any moment. He immediately felt pity for them and said, that he would spend the fruits of his entire spiritual merits/powers in order to save them. He enquired who they were and they said that they are the ancestors of the snake race and that due to nobody being there on earth to care for their welfare, they were doomed. They said that no spiritual powers would help them, only if their Vansh-Parampara (family lineage) would be upheld, they could be spared from their fate of falling into hell. They said that there was only one in the whole family-heritance and he was also useless since he had become a famous Sadhu with name Zart Karu who was greedy after spiritual practice. They said to him, that if he were to meet Zart Karu, he should tell him about their condition and ask for help. On hearing this, Zart Karu became sad and with choking voice he said to them: “You are my fathers & forefathers. I am your begotten son Zart Karu.” He agreed on getting married and have a son, under the condition, that he would not have to take the burden of feeding her unto himself. 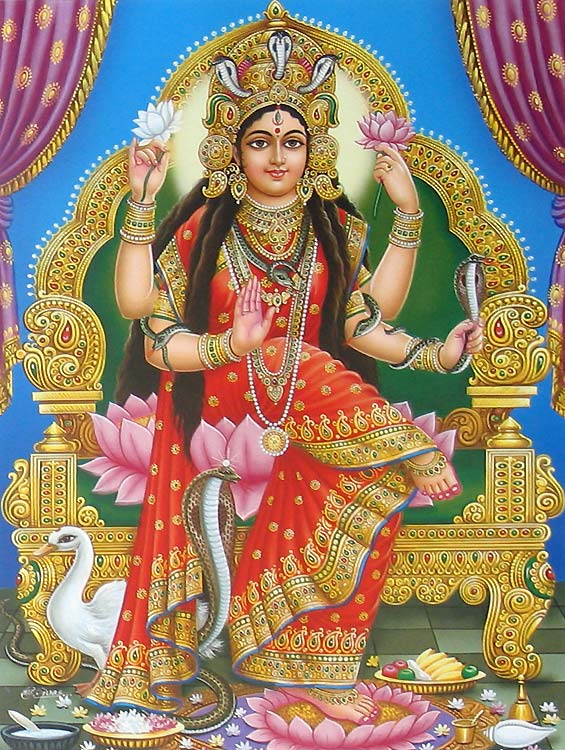 The snake king Vasuki himself gave his sister to Zart Karu and agreed to look after her even after marriage. They got married and Vasuki’s sister eventually bore a divine child who was named Astik. He was brought up in the court of snake king Vasuki with great care and concern. He finally convinced Janmejaya to abolish the snake sacrifice and peace was established. So in that sense Vasuki’s sister fulfilled the wish of the snakes and therefore became famous as Mansa Devi, fulfiller of wishes. 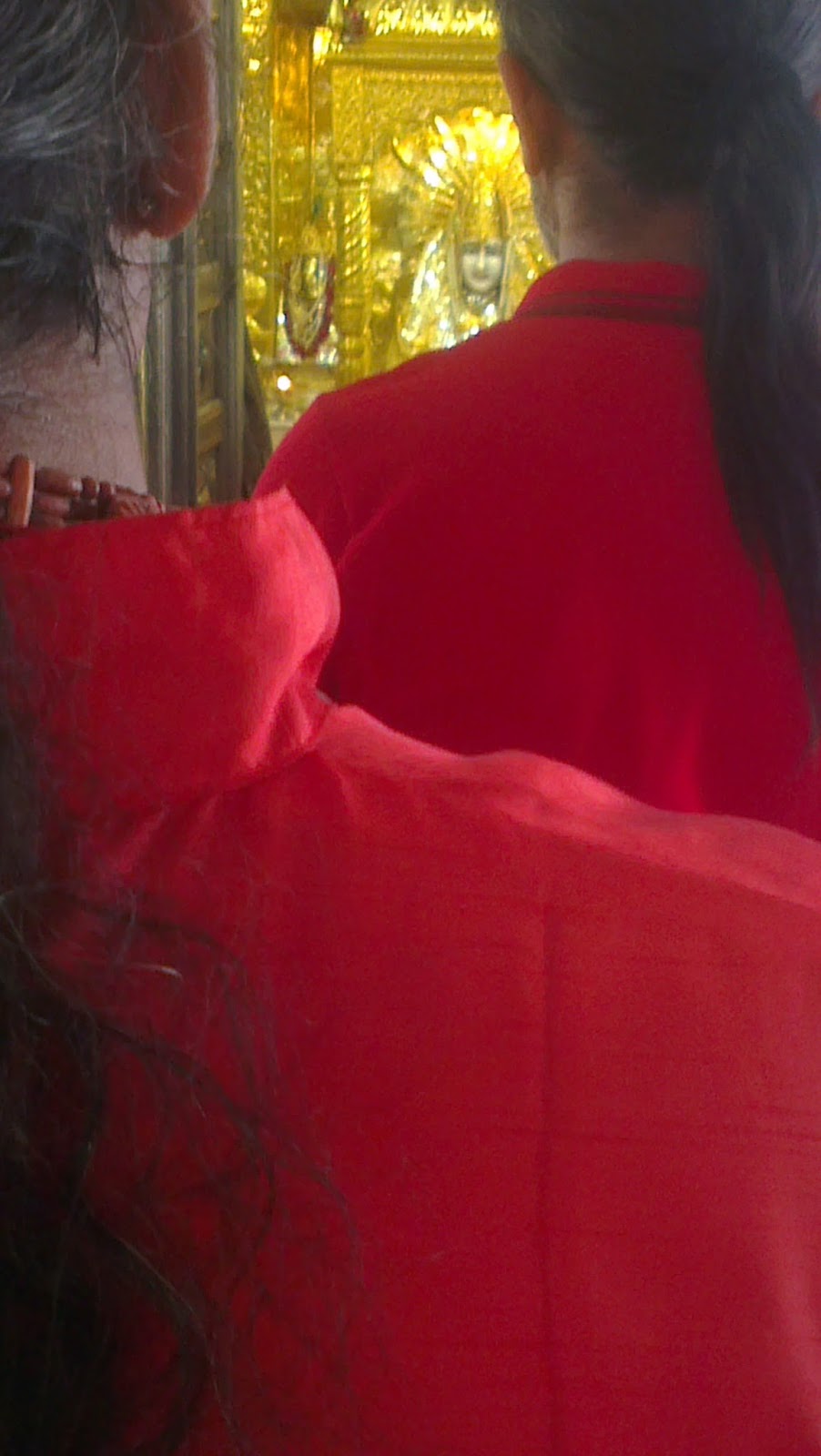 After visiting the main temple of Mansa Devi and having Darshan of Her, we walked a little bit further up and visited another temple which was built there. Guruji was very impressed by the beauty of it. Around it were big trees. One of them was a bilva tree, famous for its three leaved leafs that are dear to Lord Shiva. We then sat there a while near the temple and rested. 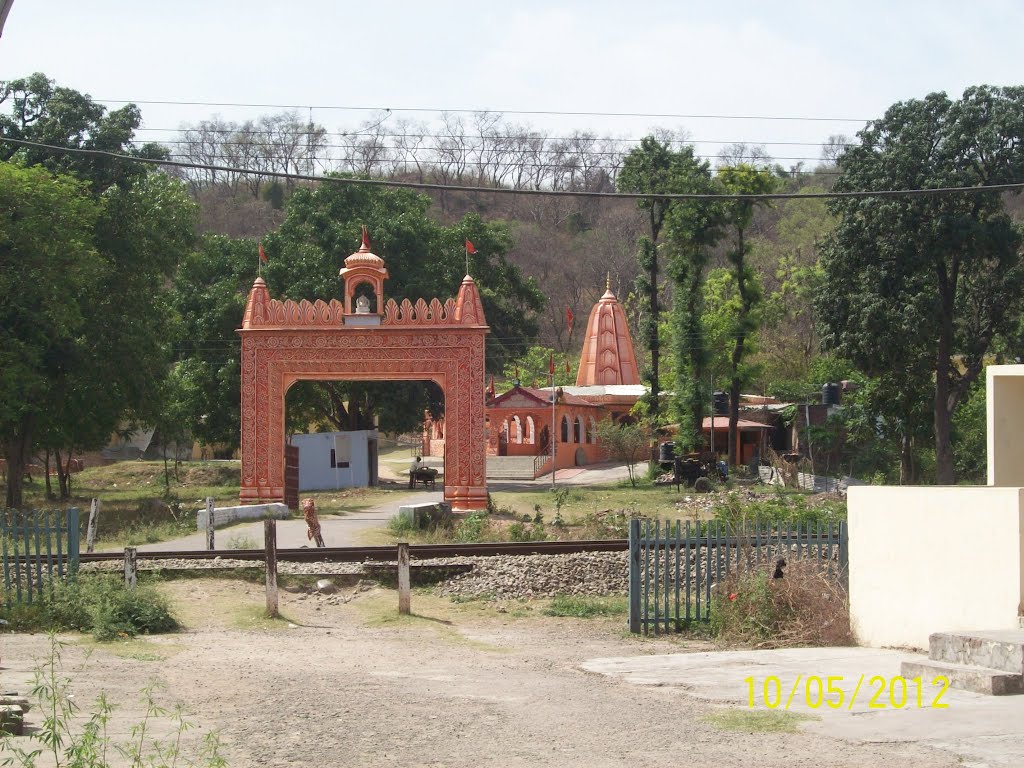 Once we got into the bus we continued our journey towards Chandigath. In the outskirts of Chandigath there is a place called “Chandi Mandir” where we stopped with our bus. It was already getting dark. We got out of the bus and first had to cross the railway line. Right behind it was the temple of Chandi (Kali). It is in this place that, when Chandi was fighting the demon Mahishasur, got so in rage, that She could not be stopped by anyone, Shiva Shankar lied down in Her pathway to stop Her. 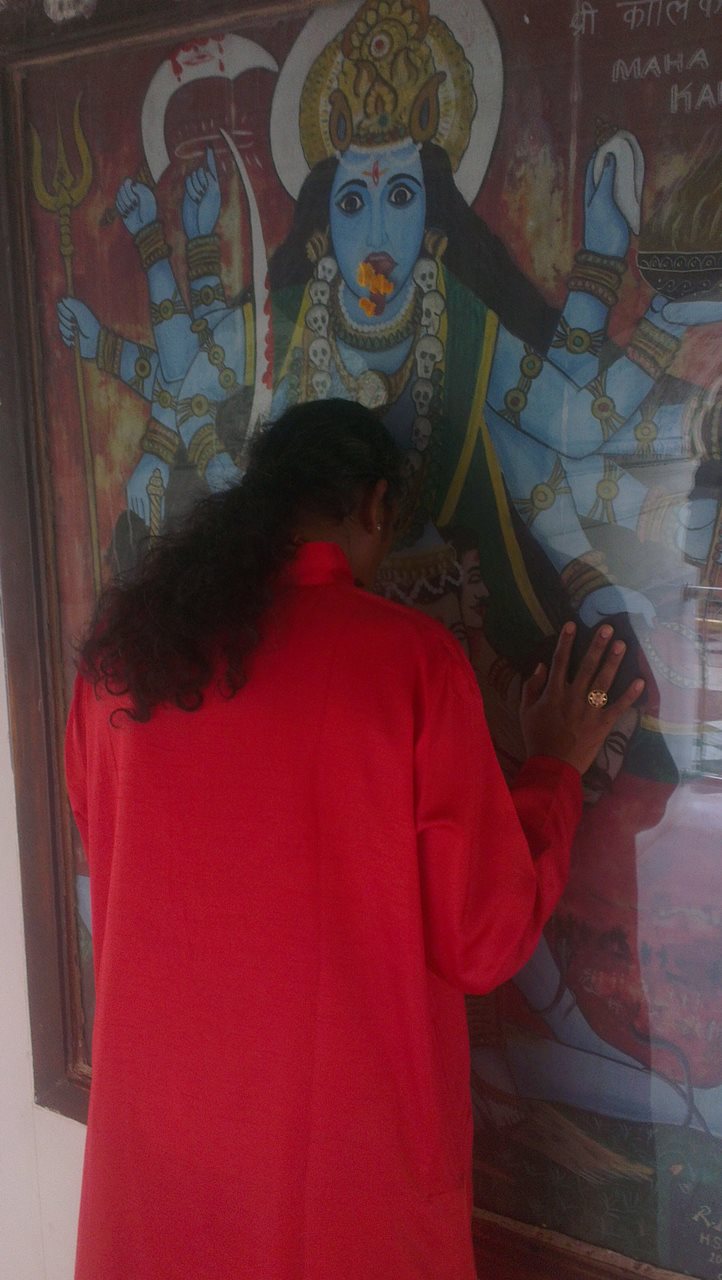 When She saw Him lying there, She was so surprised, that She stuck Her tongue out in surprise and calmed down. In some narrations it is said the Shiva lay there as a baby, and when She saw the baby, Her motherly feelings were awakened so She calmed down, took the baby in Her arms and suckled it at Her breast. 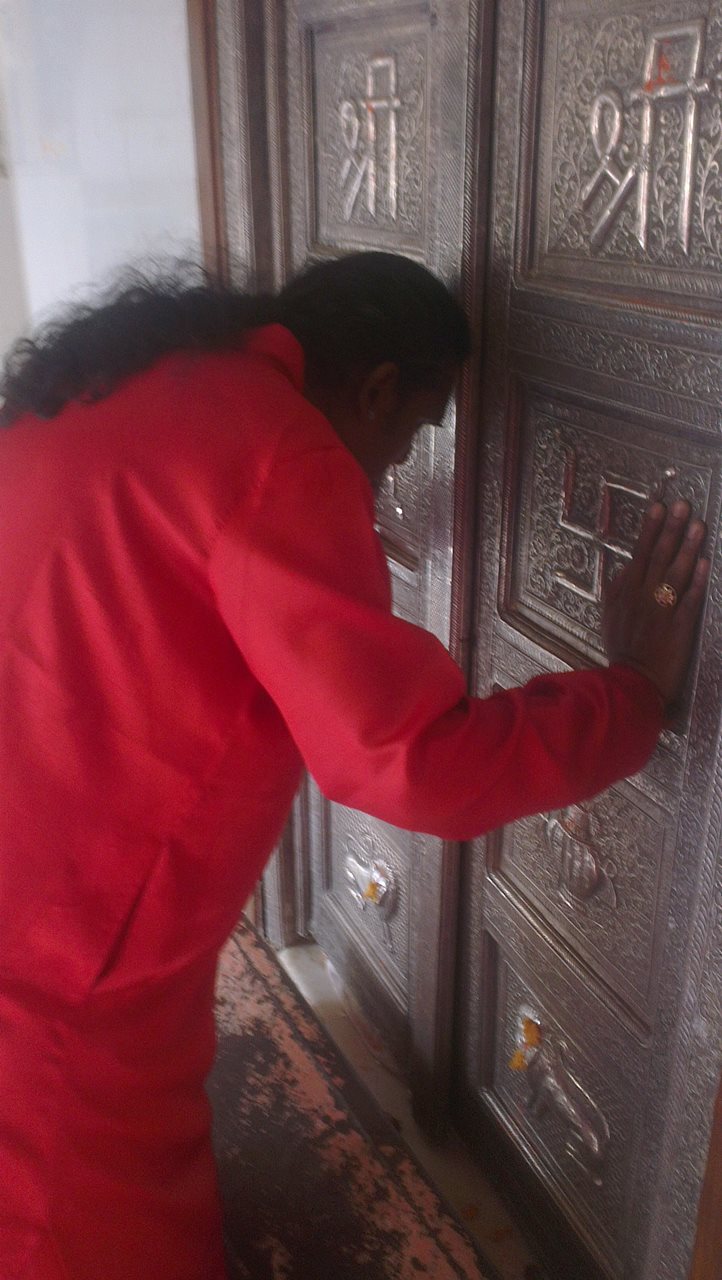 Since then Ma Chandi is there in the form of a Pindi. When the Pandavas were in exile, there was one year that they had to live completely incognito as per the agreement of the game of dice. During this time they discovered the hidden image of Chandi Devi in the forest and began to worship it and performing tapasya. Ma Chandi was pleased with them and granted them the boon of victory and presented them with weapons. The pujarini (priestess) gave to each one of the group a lot of Prasad and then we walked back to the bus.
Eingestellt von Unknown um 06:16
Email ThisBlogThis!Share to TwitterShare to FacebookShare to Pinterest
Labels: Pilgrimage India May 2014
Newer Post Older Post Home