Thursday, May 29th
The first temple we visited was Bagalamukhi Temple. Bagalamukhi means “crane headed” and also “face of wisdom”. She is one of the ten Mahavidyas and is prayed to for victory (in battle and in court cases), against gossip and against enemies in general. However, She only brings justice when it is deserved by the devotee. She can also change everything into the opposite. She is the force in the universe that brings balance, good becomes bad, bad becomes good, etc, ultimately in order to bring the devotee beyond the opposites, beyond duality, to the Divine. It is generally stressed to have a proper initiation by a Guru for performing Her sadhana. 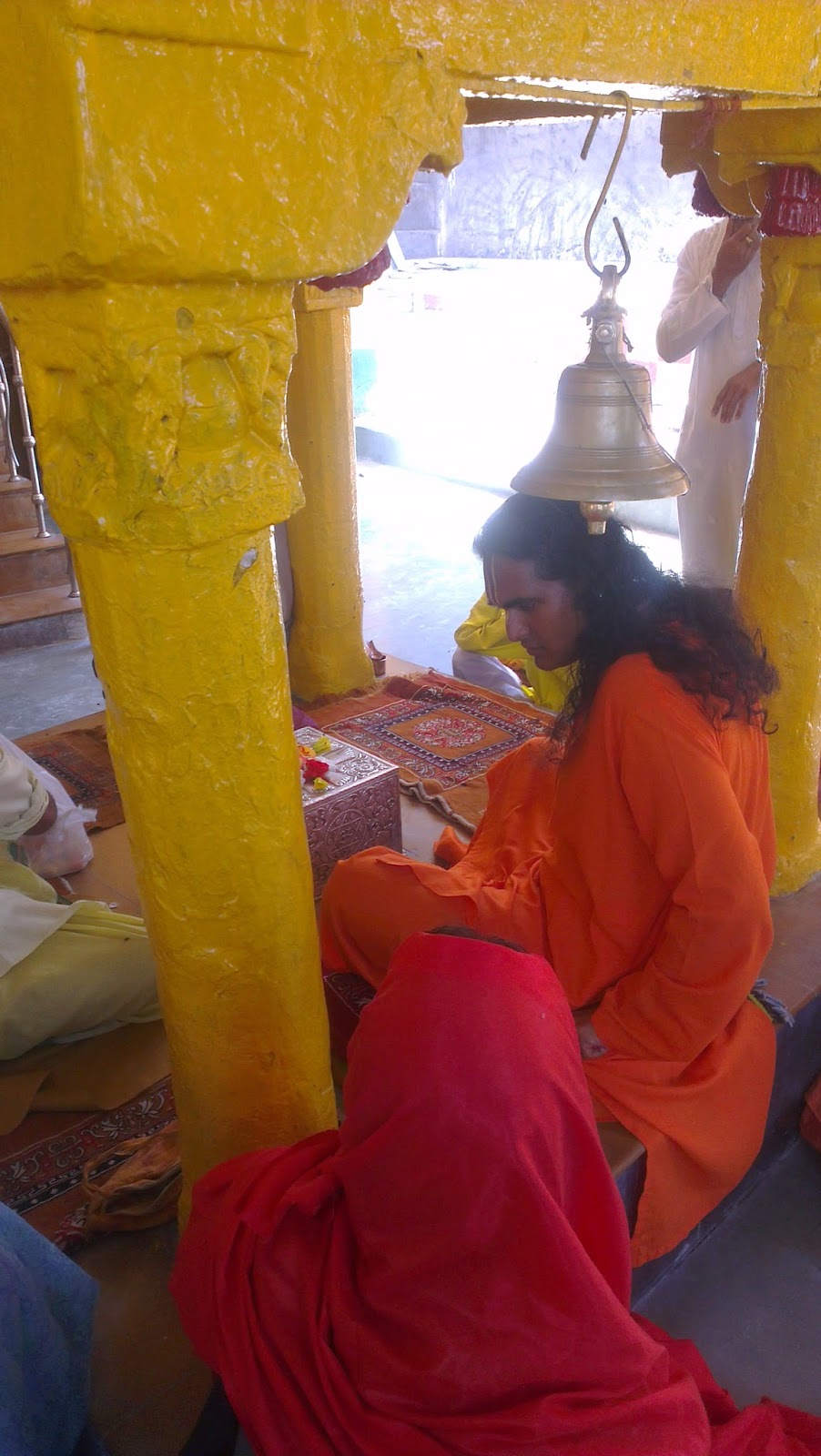 Everything in the temple is in yellow color since it is the color that Bagalmukhi likes most. Also the devotees and priests wear yellow clothes. Guruji remarked that the yellow color gives the temple a very bright atmosphere. The deity of Bagalamukhi was installed by no other than Lord Rama himself, hence a very long time ago. He then prayed there to Devi, when he set out to reclaim Sita, for victory in battle. Bagalamukhi gave him the powerful “Brahma Astra” weapon with which he killed Ravana.
It is interesting to note, that even Ravana’s son, Megnath, did penance there to be victorious by praying to Neelamba Devi by performing 1000 yagnas. However, Lakshmana and Hanuman stopped him so the sacrifice was not completed successfully.

We had Darshan of Devi and one priest was very kind and made a close up photo of Her with Guruji’s phone: 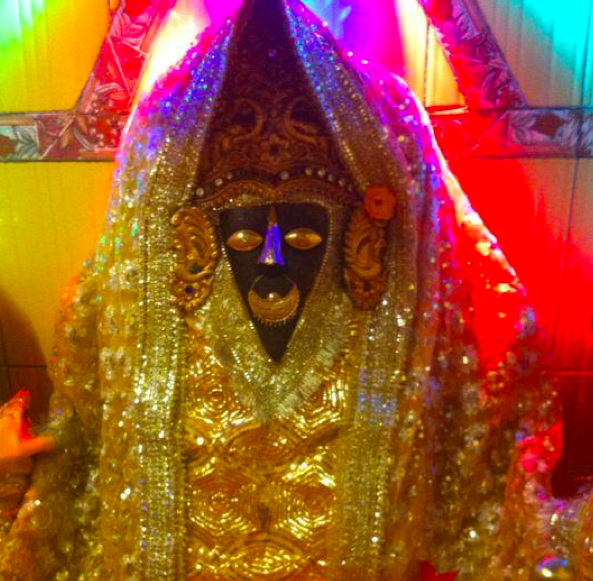 This is how She is depicted normally, holding the tongue of the enemy (demon) in one (silencing him) and a club in the other hand. 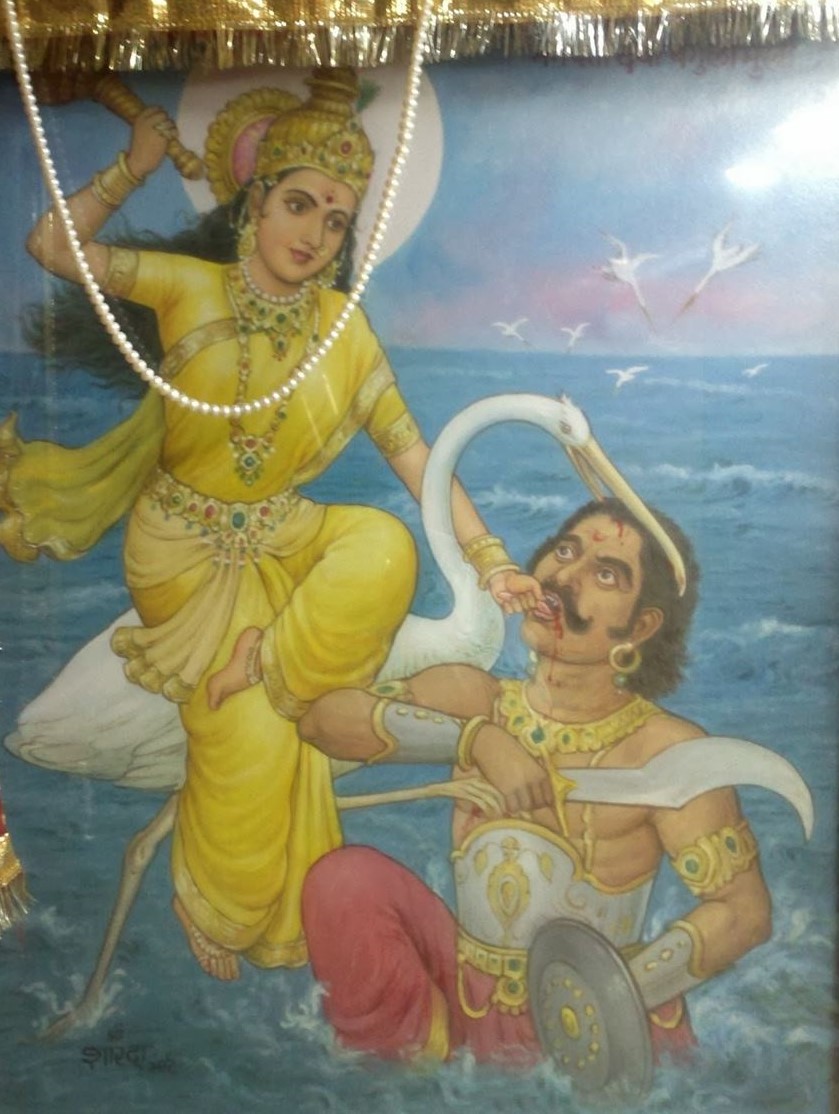 Behind the temple, a few steps down, there was another, smaller temple, that housed a big Shiva Lingam. This Shiva Lingam was actually installed some 5000 years ago by the Pandavas. Guruji and everyone else paid their respects to Shiva. 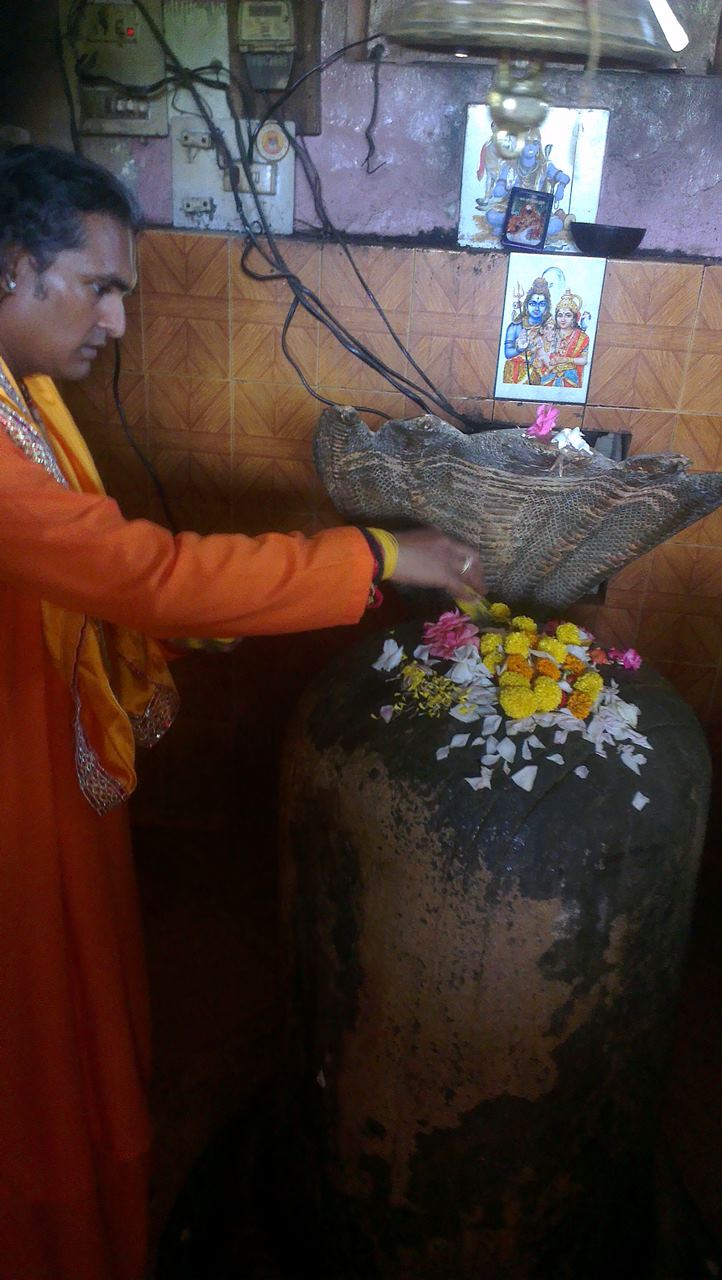 We continued our journey and arrived about an hour later at Chintpurni Temple. The deity there is “Chinna Mastika”. She is present there in the form of a pindi (rock formation). It is said that part of Sati’s feet have fallen here. The temple was founded by a devotee of the Goddess called Mayidas. Mayidas was the youngest of three brothers. His father had already been a known devotee of Durga Devi. Since Mayidas showed no interest in the family business and neglected it, his brothers excluded him from it. He was not unhappy about it since it allowed him more time for worshipping the Goddess. One day he went to his in-laws on foot. On the way he rested under a banyan tree. While he was sleeping, he dreamt of the Goddess in the form of a young girl in all her splendor and glory. She instructed him to build a temple at this very spot. When he awoke he continued his way but could not stop thinking about his dream. As he returned from his in-laws he stopped at the same tree and intensely prayed to Ma to reveal to him Her plans. Suddenly everything around him turned into divine light and She appeared to him riding a tiger. She told him that She was present beneath this tree in the form of a pindi (rock formation) since time immemorial and instructed him to build a temple and worship Her there. He said he is a fearful, weak and uneducated man, and doubted that he could achieve at this, since there was not even water at this place. She blessed him and said not to worry and instructed him to remove any big stone he could see and that he would find water there. She also assured him that he and all his descendants would have the exclusive right to worship Her there and that they would always be taken care of. After the revelation of Durga, Mayidass became completely fearless and was full of ecstatic love for the Goddess. 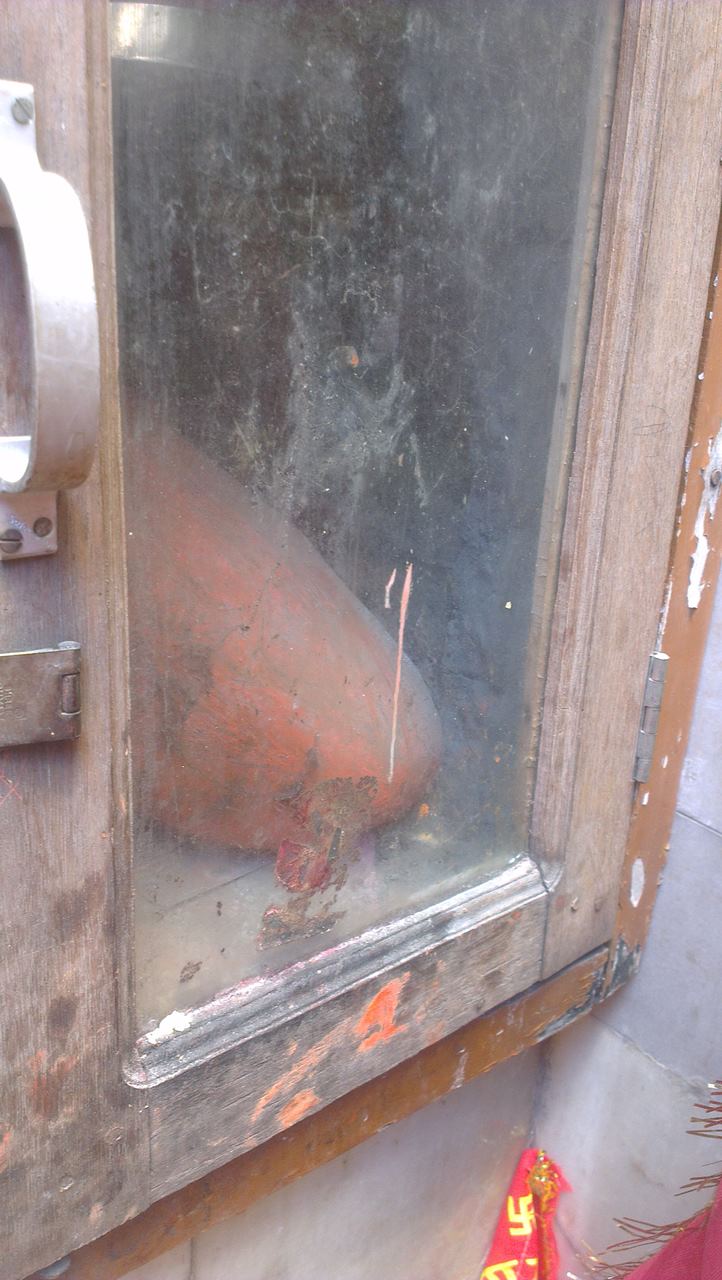 He went to the first big stone he saw, turned it around and water gushed forth from underneath. He immediately started constructing the temple and it is there ever since. The stone can still be seen at this place. 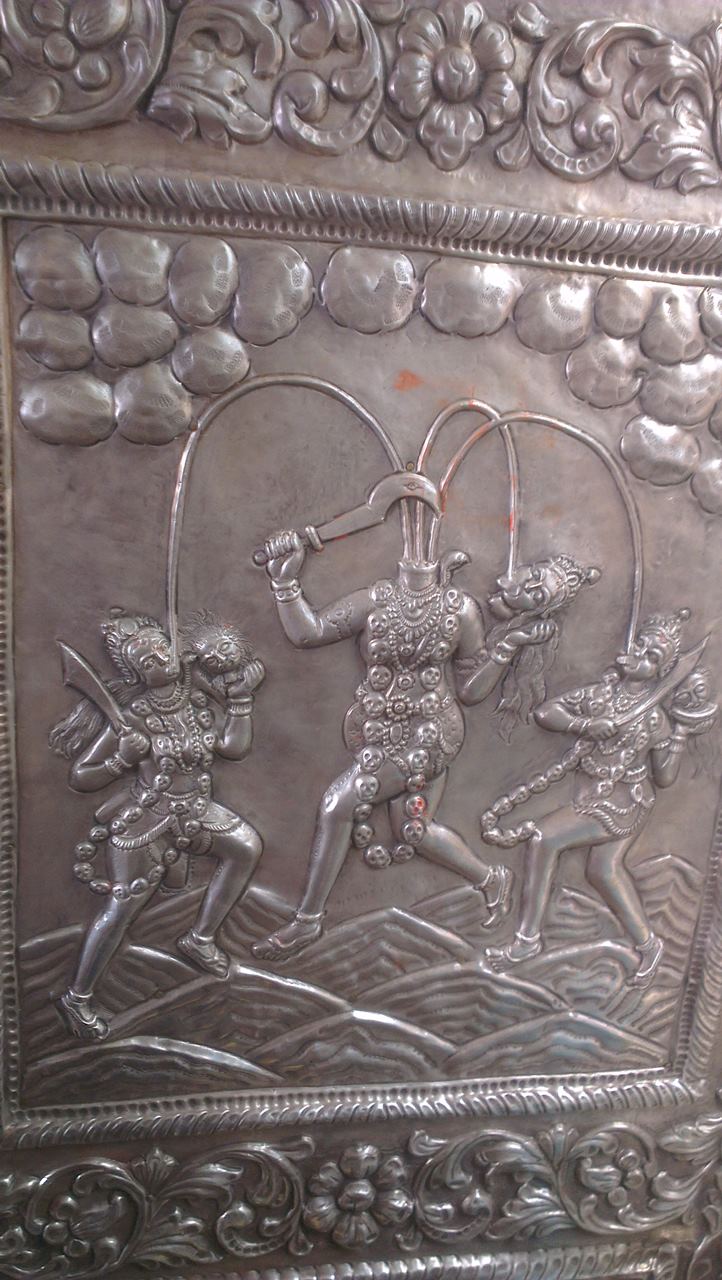 Chinnamastika Devi is usually depicted as standing on a love making couple. She holds a sword in her hands and has just cut her own head. From her neck two streams of blood gush out and “feed” Her two attendants, the two yoginis Ajay and Vijay (who according to the story have asked her for food since they were hungry). A third stream of milk also gushes from Her neck with which She feeds Herself. Her standing on the couple can be interpreted as creative energy (Kundalini) and the two streams of blood representing “Ida” and “Pingala” Nadis (energy channels) which she feeds since they are hungry (representing ever “hungry” duality). The white stream of milk would represent “Shushmna Nadi” (main energy channel) which means keeping the creative energy within and feeding Divine mother Herself (representing non-duality, oneness). 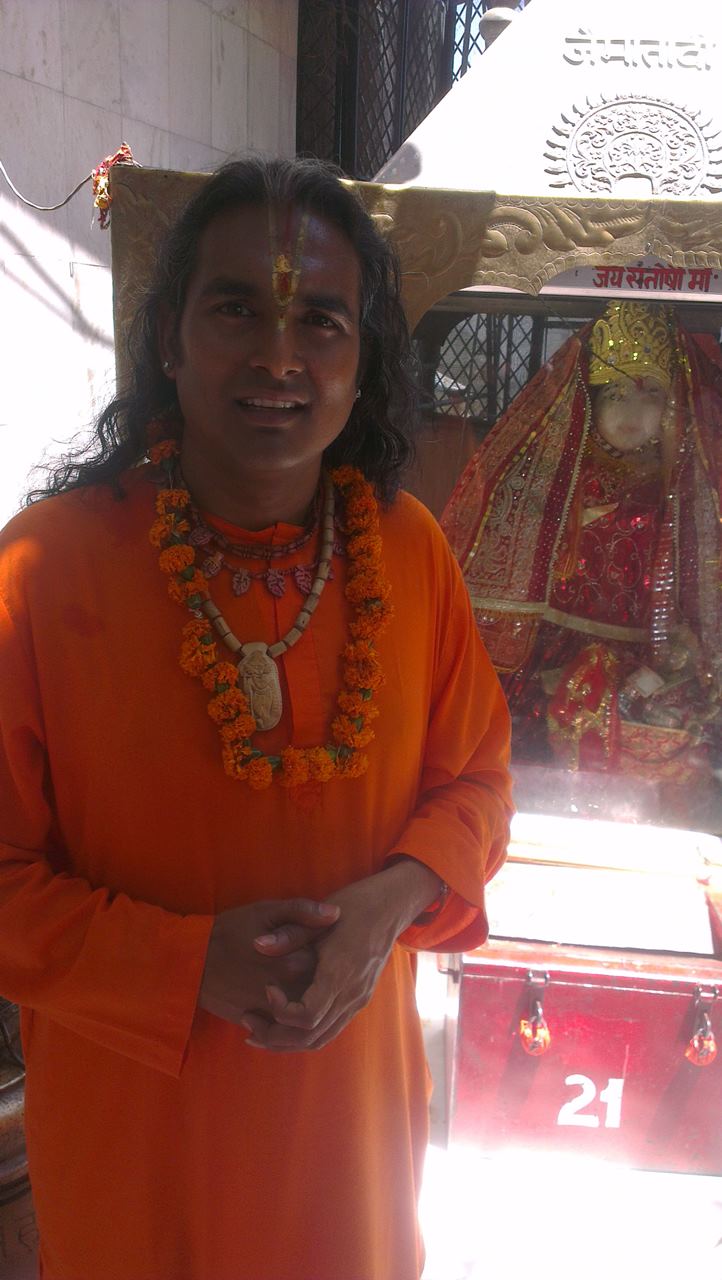 The atmosphere of this place was especially serene and peaceful. Unfortunately we did not have so much time to spend there since we still had a long way to go on that day. 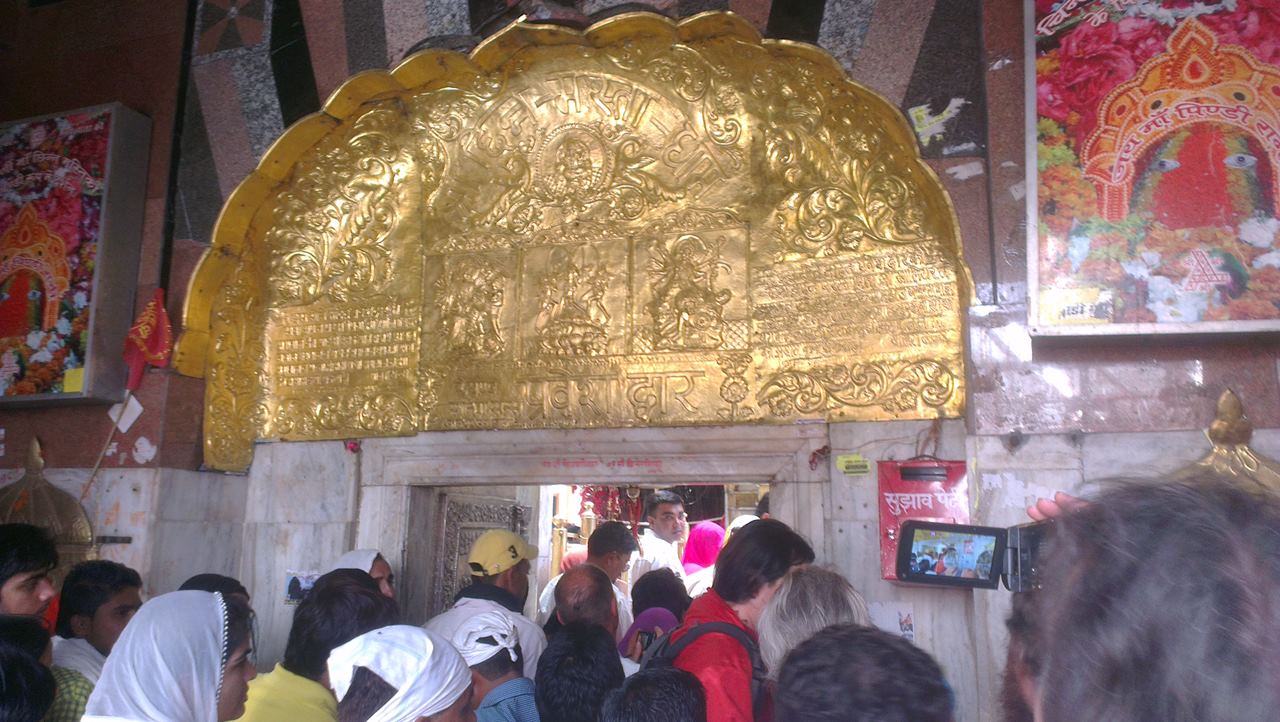 We drove again down from the mountains (hills) into the planes and entered the state of Punjab. It was interesting to see that as soon as we entered Punjab everything seemed cleaner and better organized than before. We did not stay in Punjab very long, soon we entered again into the state of Himachal Pradesh and then finally reached our destination, Naino Devi, situated at the hill top. There we got into our “hotel” which actually was an ashram. After scrapping off the chalk of the shower head it was even possible to take a shower which really helped in this hot wheather. 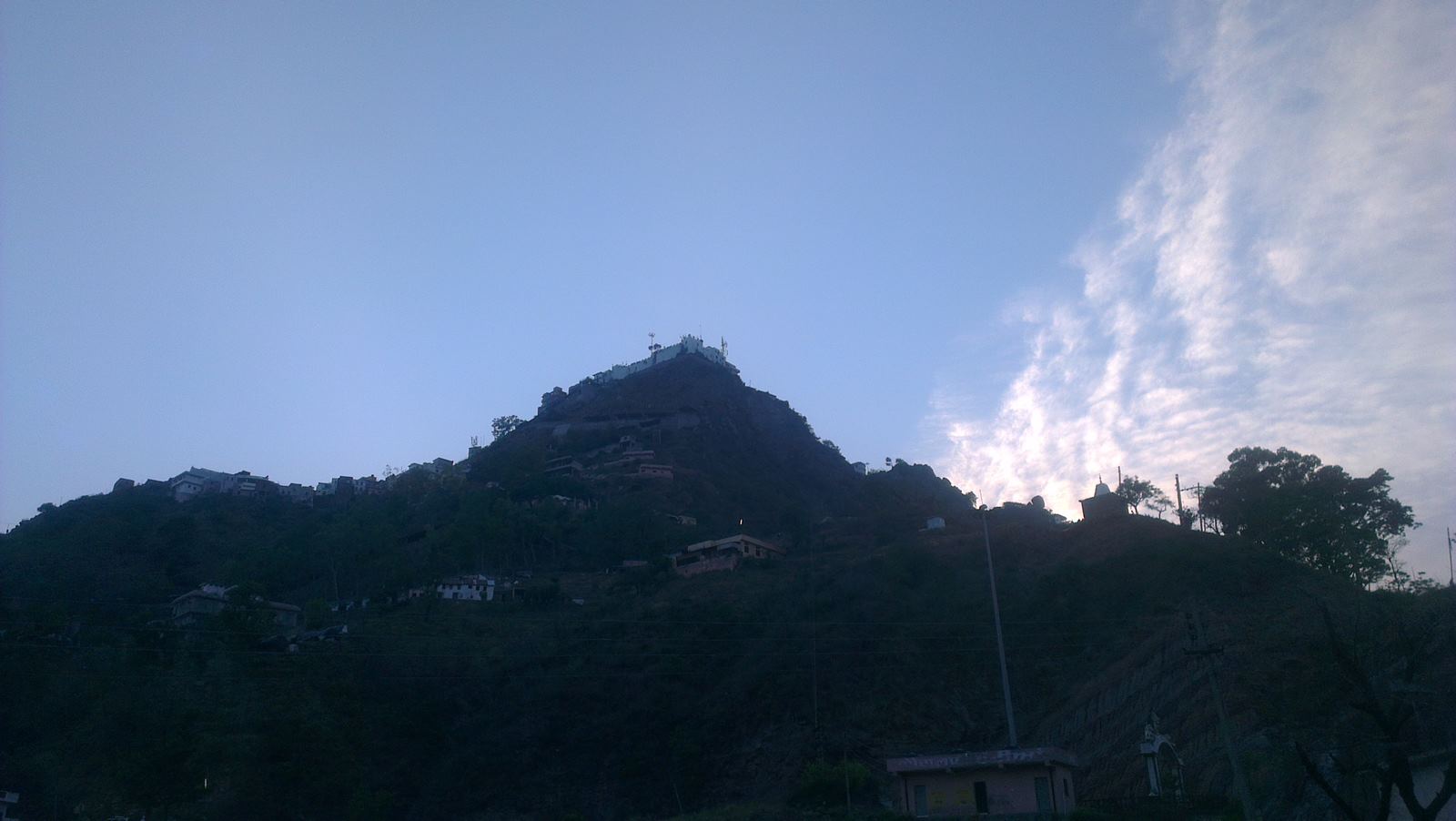 In the evening, short after our arrival, we went up to the temple which was very near. Naino Devi temple is the place where Sati’s eyes have fallen on earth. She is also present there in the form of a pindi. We received Her darshan. Twice a day She is smeared with sandal paste and in the evening She is also put to the, similar like in Jwalamukhi Temple. After Darshan the main priest showed us around in the temple. 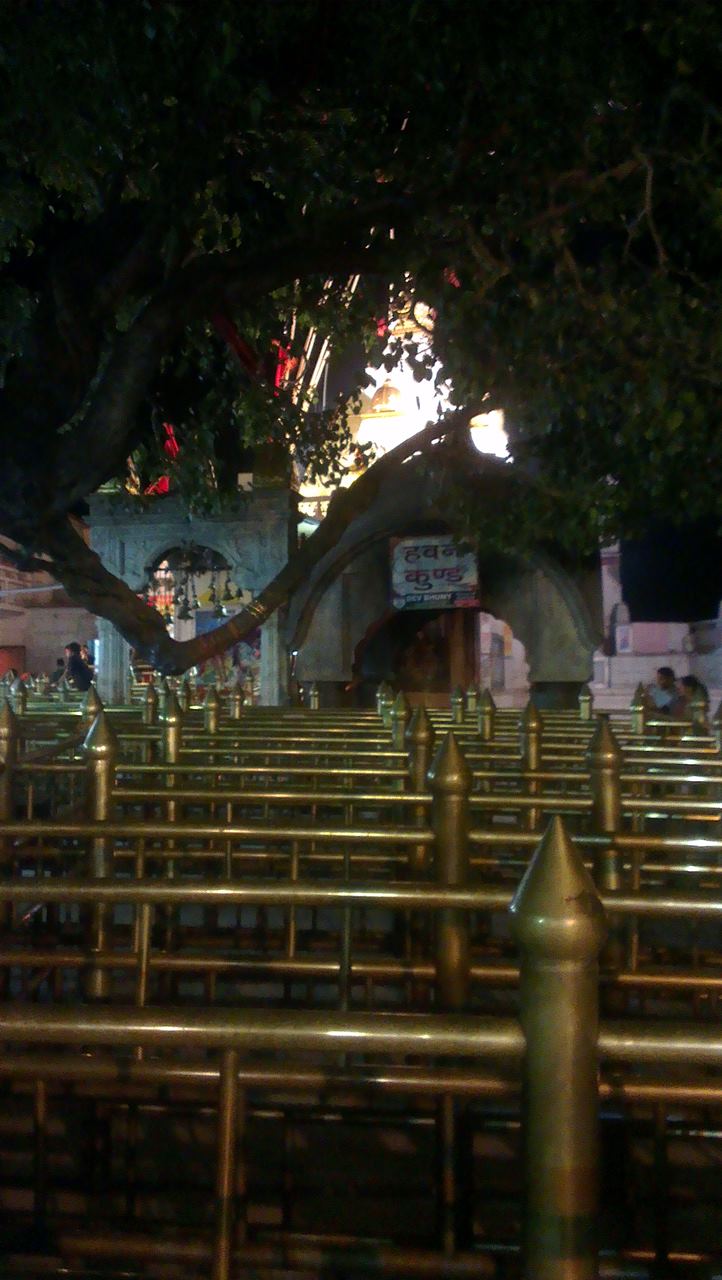 He said that sometimes the flame of Jwalamukhi “comes” to Naino Devi temple and then people can see a blue flame over the temple roof. If one touches that flame, five small flames appear over ones fingers, without burning the person. He himself has witnessed it.
(more about this see following link: http://www.3marg.info/pilgrimages/maa-jwalaji-temple/9forms-jwala-maa.shtml) 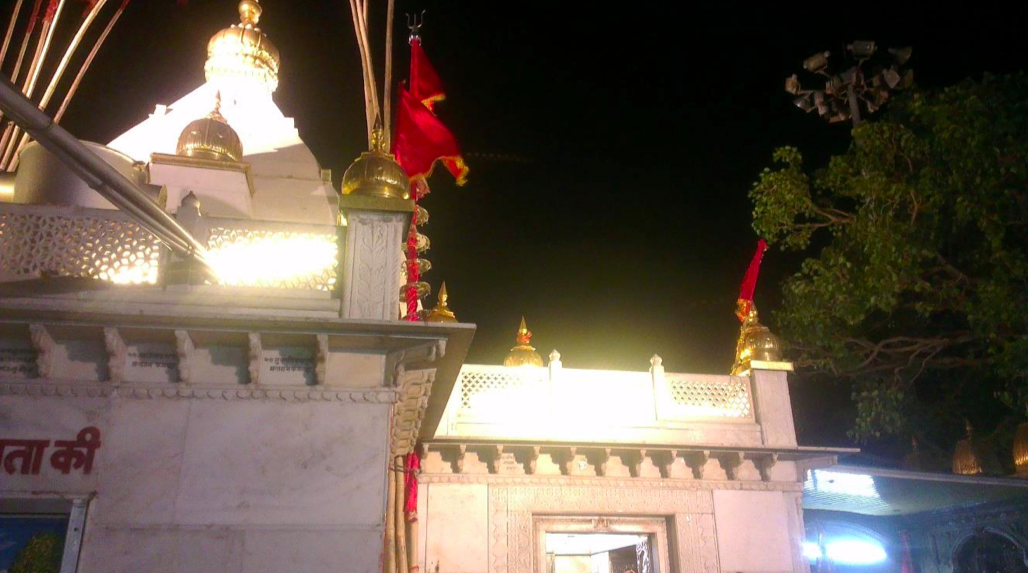 Guruji asked him, if it was possible to get some of the sandal paste that was on the murthi. The priest said, that he has NEVER given this sandal paste to ANYONE. But he said that for some unknown reason he feels compelled to give some of it to Guruji. In that moment one could see so much love and devotion in his eyes and it was truly touching to see how much dedication he had to Ma and how  “protective” he was of Her, yet on seeing and experiencing Guruji he felt that Mother wanted him to give some of her sandal paste to him. Some of us sat for a couple of minutes under the Pipal tree. Swami said that whoever mediates under a pipal tree, the effect of their sadhana is a hundredfold stronger. Short after we attended the aarti and the bed time ceremony for Ma. 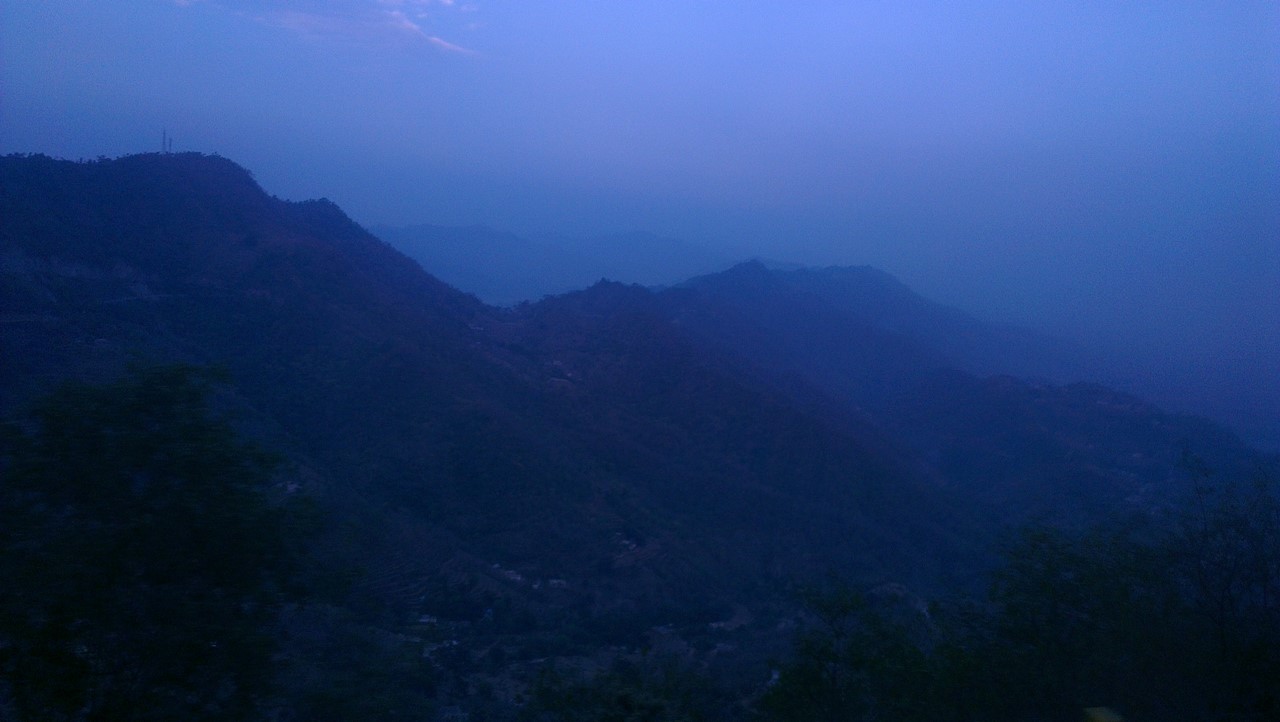 It is always nice to see how the local people are amazed to see (white!) Vaishnavas visiting their Shakti Peeths. Many of them have never seen a Vaishnava visiting their temple, not to speak of a “white” (Gora) Vaishnava! It happens often that we are asked to take pictures with the local people or other Devi Devotees. It shows how the path of Bhakti can transcend all nations and traditions, since Bhakti is inherent in them all.
Happy we returned to the ashram to have dinner. 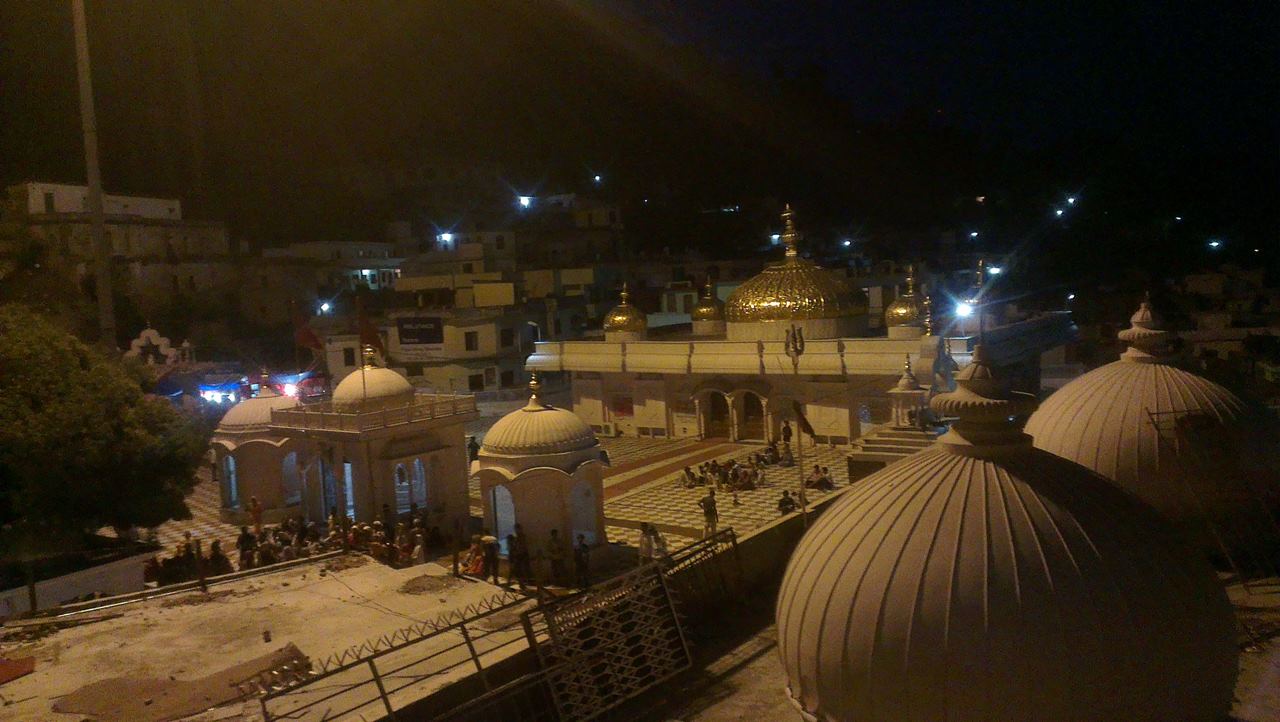