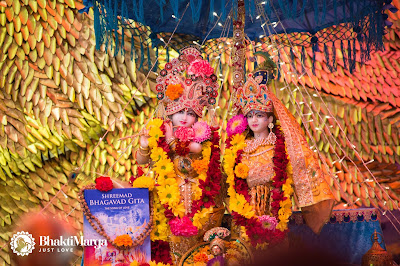 The beginning of the Bhagavad Gita course with Paramahamsa Sri Swami Vishwananda set the tone for the days to come. Participants took their seats at 10:00 in the morning, and waited for the arrival of the spiritual master. After the singing of bhajans, Swamiji arrived and the course officially began. 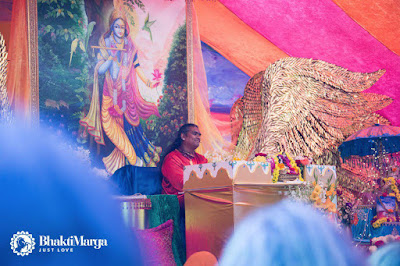 So here Arjuna is losing everything. He is sitting and crying, “What am I losing?”, forgetting that he is standing next – he is sitting next to the Supreme Lord Himself. But to whom else he would go? He is the only friend. He is the only true friend who really cares for you, no one else! Guru and God is the only one which cares for you. The rest are just a drama, a drama which you put on.

Here Bhagavan Krishna is revealing that drama to Arjuna, “These are all drama, nothing else is real.” All these relationships that you put. What kind of ‘ship’? Friendship, relationship, what ‘ship’ else there is? Eh? Which ship you go in? Eh? Allship. Worship, partnership. Eh? Mothership, fathership, so all that kinds of ships will drown. So don’t enter this kind of ship. Only ship that you have to enter is Guruship. So in that boat you are safe." - Paramahamsa Vishwananda, 16 August 2016 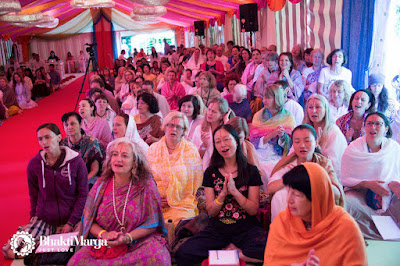 On the first day of the course, Paramahamsa Vishwananda briefly summarised each of the 18 chapters and gave an in-depth foreshadow of the material to be covered. By providing the context of the Mahabharat and how this glorious conversation between Arjuna and Lord Krishna came to be, Swamiji started the course by giving an encapsulating introduction to the circumstances regarding the Gita itself. 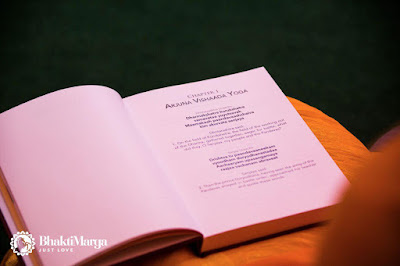 "After the Kurukshetra war, one person was in a hurry to see the war, you know. So he arrived there, looked around, didn’t see anything, empty field, you know. Kurukshetra nothing can grow, even till today. He looked left – right, looking in the waste desert land, said, “There was a war here?” Holding the ground with his hand, trying to see all these thousands warriors, you know, have been killed, all this blood has been shed, but the land is dry completely, desert. He started wondering, “Am I in the wrong place or what happened? Is it an illusion? Is it Krishna have made everything disappear?”

At that moment the sage appeared to him and said, “No my dear, you are in the right movie, not wrong one, but how you see it, what you perceive about it, that’s different.” Then he asked the question, “How the war happened?” The sage said, “Yes, it is still happening.” He said, “How?” Then the sage touched him and brought him to a different spheres, not outside of him, but inside of him. Then he perceived his inner struggle. He perceived this battle. Kurukshetra is this field, no? So he experienced this inner battle between the mind and the heart. So which one will win? Those who surrender, who have taken shelter to the Feet of Krishna, they will be victorious no matter what. Even if this world, even if this universe itself is annihilated, but those who surrender to Him will always be victorious. This is His promise in the Gita." - Paramahamsa Vishwananda, 16 August 2016 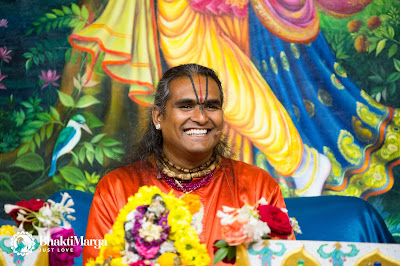 After Paramahamsa Vishwananda had done a summary on each chapter and spoke about the context surrounding the situation, Swamiji spent the latter half of the night giving commentary on Chapter 1 and almost half of Chapter 2. By the end of the night, it was nearly midnight, making the first day extensive and plentiful. 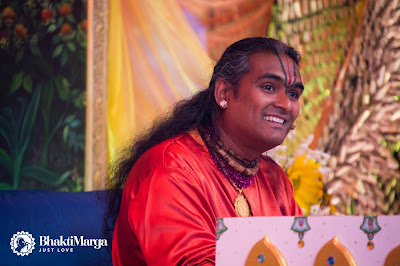 "Those who dwell only on the outside, even if they look for happiness, their happiness will always jump from one thing to the other. They will never have this inner satisfaction. But those – because the outside reality will never give one this satisfaction which you are looking for. The Kauravas stand for this outside reality which is looking, fighting, always want something, but it’s all material, it’s all external which brings superficial joy, joy for a very short time and misery for a longer time. Fully satisfied is the soul which has attained and realized the relationship with God. And this is where one finds real satisfaction, not just a superficial satisfaction, but eternal satisfaction, you know, which is forever, permanent. So due to for the sake of this satisfaction Bhagavan Krishna said, “Move from that reality which your mind understands to a different reality who you truly are." - Paramahamsa Vishwananda, 16 August 2016

During the Gita course, a great resource for many of the participants has been the new Shreemad Bhagavad Gita: Verses and Translations book. This book contains the Sanskrit verses of the Bhagavad Gita with their English translations. Also included are short excerpts from Paramahamsa Vishwananda about the specific section, a Mahabharat Family Tree, and a Sanskrit Pronunciation guide. You can learn more about this resourceful book by visiting: http://www.bhaktievent.de/magento/index.php/books/sri-swami-vishwananda/shreemad-bhagavad-gita-verses-and-translations.html
Eingestellt von Unknown um 16:55
Email ThisBlogThis!Share to TwitterShare to FacebookShare to Pinterest
Newer Post Older Post Home